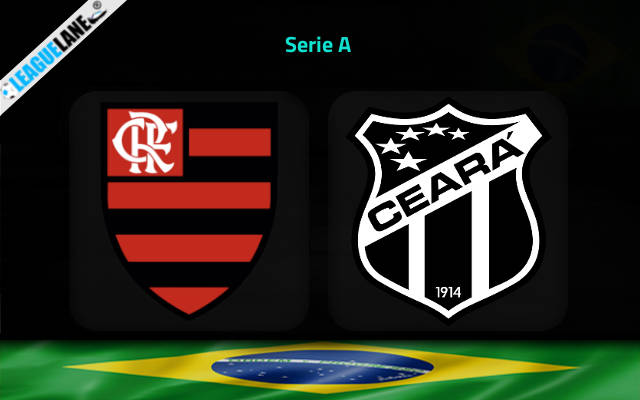 Flamengo enters this game after a loss in Copa Libertadores final to Palmeiras. They only have a theoretical chance to defend their Campeonato Brasileiro Serie A crown as they host Ceara on Tuesday at the Maracana stadium. A win for the guests ensures a qualification spot for the Copa Libertadores and expecting other fixtures to streamline into their favor.

At the 2nd spot is the defending champions with 67 points. They played 34 matches, winning 20 of them while the number of draws and losses share 7 each. They have the highest goals to conceding ratio on the table standing at 66:31.

Flamengo haven’t had any problems with scoring, hitting the target in each and every one of their last 6 matches. They’ve claimed a sum of 13 during that period while also conceding a total of 5. Coming into this match they are unbeaten in 9 league games so far.

Ceara is at the 8th spot in promotion for Copa Sudamericana. They have 49 points from 35 matches of which they won 11, drew 16 and lost 8. They won the previous match against Corinthians by 2-1.

In their last 6 outings, they have scored 11 goals in total. During that period, their defenders have had 5 goals scored by their opponents. Coming into this meeting, Ceara haven’t been defeated in their previous 2 away fixtures.

Flamengo usually have the bulk of the possession, but when they faced each other last time, they drew 1-1 despite having 63% of the possession and 5 shots on target. The guests have drastically improved their defensive shape, and their overall composure in the matches played away from home.

We envisage a win for the defending champions as they have the upper hand in the league as well as in the past h2h matches.