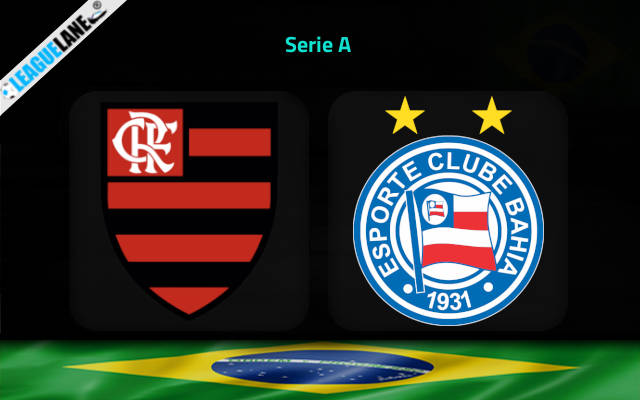 Flamengo have scored goals with ease past Bahia in the last several years but the visitors have improved their back line significantly under new manager Guto Ferreira. Bahia are unbeaten in seven subsequent league games and we don’t see Flamengo drubbing them this time around.

Reigning champions Flamengo did not give up the battle for the Serie A title yet. They are currently 12 points shy of Atletico Mineiro at the top of the standing have a couple of games in hand, meaning the gap can theoretically be six points with eight matches left to play.

Nevertheless, if they want to keep the hopes alive, Flamengo need to pick up a three-pointer on Thursday evening when they play host to Bahia in the last game of the Matchday No 31.

The hosts are heavy favorites but they will have to dig deep to secure the much-needed victory on the occasion.

Bahia are one of the most in-form teams in the league right now. The visitors escaped the red zone with a phenomenal streak of seven consecutive matches without a loss.

They have won three and drawn four along the way. The streak came parallel to the appointment of Guto Ferreira as the new head coach.

Bahia are thus yet to be defeated with Ferreira at the helm. We must praise the tremendous work the Brazilian manager has done to lift Bahia from the very bottom of the standings to such a strong run of results.

The rock-solid defense is the team’s main strength under Ferreira. Bahia conceded only one goal in the last seven league fixtures.

It will be very interesting to see how they will cope with one of the strongest attacking lines in the country at legendary Estadio Maracana on Thursday.

Tips for Flamengo vs Bahia