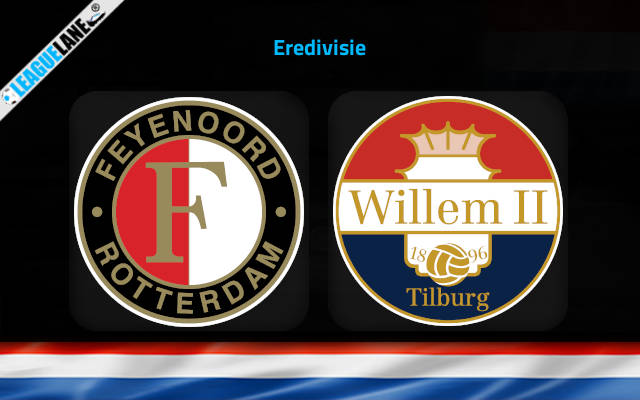 Feyenoord dropped a 1-2 lead against champions Ajax two weeks ago when they lost 3-2 in a great football affair in Amsterdam.

The team led by Arne Slot now have only one win in the last four Eredivisie games. They have lost the battle for the top-two positions as a consequence.

Feyenoord will be looking to bounce back on Saturday evening when they host relegation-threatened Willem II in the last fixture of the day in Rotterdam.

A win here would boost up the team’s confidence ahead of important UEFA Europa League quarterfinal tie against Czech champions Slavia Prague next Thursday.

Feyenoord have been scoring goals for fun recently and we certainly expect them to maintain the strong attacking form here against Willem II.

Willem II are now only one point above Fortuna Sittard in the red zone after losing four and drawing two of the last six league games.

It is, however, worth noting that the team showed a much better performance (compared to the earlier ones) in the previous round when Kevin Hofland led them to a 2-2 draw at home to AZ Alkmaar in what was his first game in charge.

Willem II took only two points from the previous six league games and they do not have much to hope for against Feyenoord, especially after conceding four or more goals in each of the last three head to head encounters with them.

We expect a one-way street for the hosts all the way here. Feyenoord are worth backing to win by three or more goals difference at the 2.05 odds.