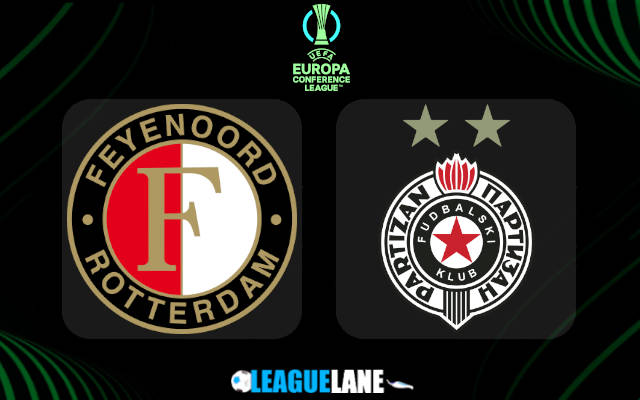 Feyenoord thrashed the Serbian side on their last week outing by 5-2 margin. Their first-leg saw a dominant Eredivisie side over FK Partizan in Belgrade with Jens Toornstra opening and closing the scoresheet for the Dutch side. The Czech side were unable to secure a win after that in the league but still remain as the league leaders. The second-leg of Europa Conference League will see the Black-Whites who enjoyed playing on road domestically, will be taking a roadtrip to De Kuip this Thursday hoping to turn the tables.

Feyenoord host this looking to extend their continental run following a dominant showing in the group stage and in the previous first-leg of Play Offs. They have won their two previous games in which they have hosted a team from Serbia across all European competitions.

The Dutch team are third in Eredivisie with 55 points from 26 games played this season. Feyenoord are hoping to win again after their last result with a 1-2 league victory over FC Zwolle held last week. The are also on a 3-game unbeaten run at home fixtures in the league.

After finishing second in the Serbian top flight last season, Partizan had to battle through many rounds of qualifying for the Europa Conference League, finally reaching the Group stage then to the Round of 8, only to lose by 5-2 at home in the first leg to Feyenoord.

Partizan remain at the top flight in Serbian Super Liga with 72 points from 27 games. They lost only once in the league and are currently on a 3-game unbeaten run. In their last fixture, they had a goal-less draw in the SuperLiga match with Napredak Kruševac.

Even though the Black-Whites are remarkable at away fixtures in the league, Feyenoord remain unbeaten in 845 of the home games played this season in the league. Also with 3 goals in hand and with the home support, a win for Partizan is highly unlikely.