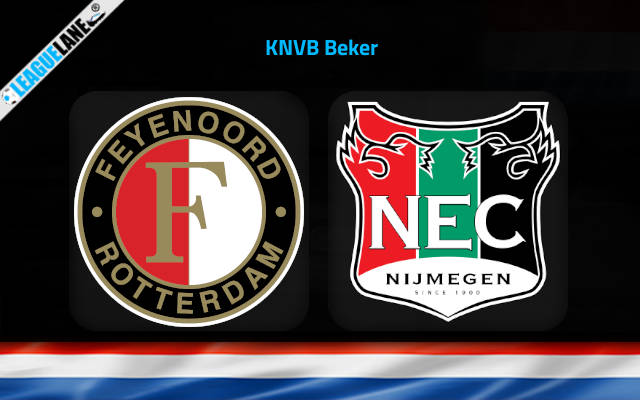 Feyenoord vs NEC Nijmegen Predictions and Free Tips from our expert tipsters when the teams go head-to-head in KNVB Cup on Wednesday, 8 February 2023.

On the other hand, NEC demolished Almere in the previous round of this competition. Four different players scored for Rogier Meijer’s side in that 4-0 victory. This is unlikely to occur again as they are clubbed against Feyenoord who are at the top of the table in Eredivisie this season.

Feyenoord are unbeaten in the last seven encounters. Both teams clashed last month and the host won that game by 2-0. The last match in this competition was more than a decade ago, at that time Feyenoord won on penalties.

At this ground, the host are in excellent winning from as they have won the last six head-to-head matches against NEC.

Who will win the match between Feyenoord and NEC Nijmegen?

We are backing Feyenoord to advance to the next round of this competition. They are at the top of the table in Eredivisie and defeated PEC Zwolle by 3-1 in the last round. Do note that at De Kuip, NEC have not won in the last ten years.

We can expect both teams to score. The main reason is that NEC have scored at least two goals since the first round of this competition. A similar pattern is also observed in Feyenoord’s case as well.

You can back the following, as our first tip is that Feyenoord will win this game by 2-1 – at 9.00 odd. The January fixture ended with Feyenoord scoring two goals against this opposition. The same was observed when they clashed with PSV in the league last time.

Moving on, our second tip is that both teams to score– at 1.83. Both teams have scored in three of the last four head-to-head matches. In the KNVB Cup, these two teams have actively scored since the first round.