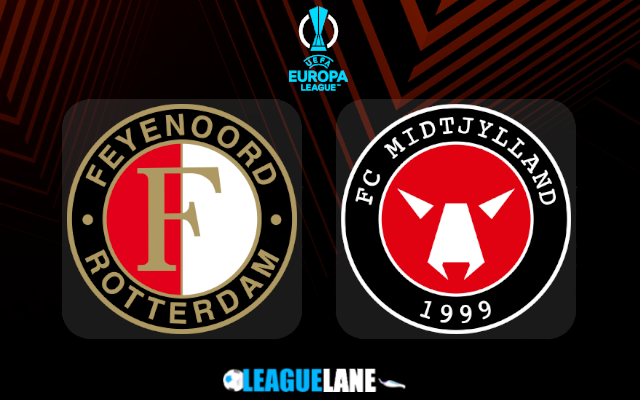 Feyenoord will play host to visiting rivals Midtjylland in this Europa League fixture on Thursday at De Kuip.

Their previous clash in the 3rd round of this season’s Europa League clash saw them both ending up in a highly competitive 2-2 draw.

Bookies were expecting Feyenoord to claim the spoils in that match. They were leading with 2-0 score in the first half but Midtjylland changed their tactics to end up the fixture in a stalemate.

However, Feyenoord will have the advantage on Thursday as they possess the home advantage. They has been sealing victories mostly here and their spirits would be high on Thursday for sure.

On the contrary, we have an inconsistent Midtjylland who follows a much worrisome form on the road of late. Their only away fixture in this Europa league season had finished in a 1-0 defeat against Strum Graz.

Going on, Midtjylland is currently at the second spot of Group F, points level with the current topper counterparts Feyenoord.

By the looks of things, we expect a highly competitive encounter between these two rivals on Thursday.

Moreover, they are having an impressive form at home lately. On top of that their offensive side had scored goals at an average of 3 per game in the previous 5 home affairs.

On the other hand, Midtjylland has been struggling for consistency on the road of late. There is no doubt that their inconsistency will an advantage for the in-form Feyenoord.

Taking into account these observations, we expect victory for the hosts Feyenoord of Thursday.