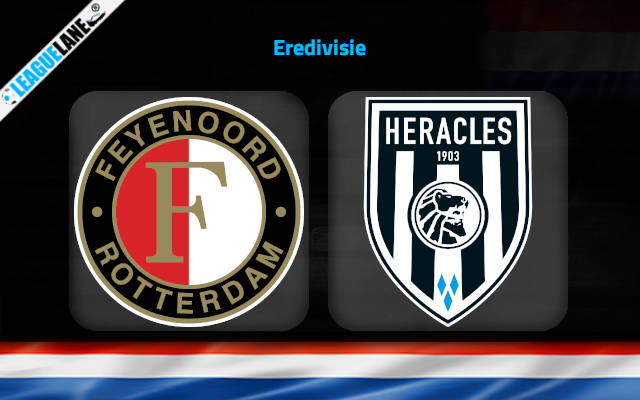 Feyenoord would be eagerly expecting their Eredivisie fixture this Wednesday as a win would take them to 2nd in the league table since they have a game in hand over the teams above them in the table. They will face Heracles who are ever so close to the relegation zone, at De Kuip. Read our Preview, Predictions, and Betting Tips with Analysis here.

Feyenoord were held to a stalemate by Twente on the road in their previous fixture. Heracles meanwhile conceded an own goal in the 93rd minute to lose their match against Utrecht away from home.

Feyenoord are having an amazing season in the Dutch top-flight, they have dropped points on 4 occasions with losses against Utrecht and Vitesse on the road and draws against Waalwijk and Twente in home and away games respectively. Wins in the other matches have taken them to the third position in the league.

Heracles Almelo has managed to pick points against teams lower in the table but has struggled against stronger teams. The team most notably held Ajax to a stalemate at home. With 14 points from 13 games, the side is currently 14th in the table, 4 points clear of the relegation playoffs spot.

The hosts have not lost a game at home since May, I do not see them losing any points against a side that is on a 5 match losing streak on the road, winless in away games since March. Hence I have backed an Asian handicap in favour of the hosts.

The visitors have scored just 4 goals on the road this season, while the hosts have kept clean sheets in 6 of their last 9 league games at home. Heracles are unlikely to find the back of the net this Wednesday.