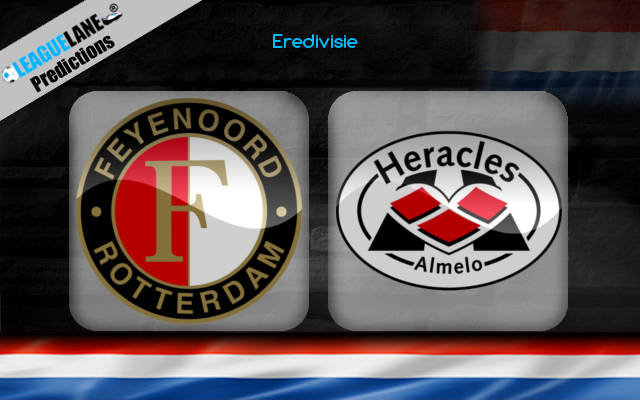 With Feyenoord proving to be a formidable side in their previous head to head games here, Heracles will need nothing short of a miracle to salvage even a point on Sunday.

The home team have been hit by a sharp decline in form and have come out on top just once in their last four games in the league. Their previous clash on the road saw them stunned by bottom dwellers Fortuna Sittard who managed to post a hefty 4-2 scoreline in their favor.

Nevertheless, the hosts have been a confident bunch in front of the home crowd and have admitted defeat just once in their last eight fixtures here, that too in all competitions.

On the other hand, Heracles bounced back to winning ways in their respective clash by taking down FC Emmen by a comfortable 2-0 scorecard. The visitors are on an admirable run at the moment as well and have lost just once in their last five clashes.

Be that as it may, it is certainly worth mentioning that the away side have not been coping well in their previous visits to this particular venue. The hosts have been securing the bragging rights without fail in each of their last six meetings in a running.

Given that Jaap Stam’s men have been at the losing end just once at home so far too, the win is more than likely to swing in favor of Feyenoord at the last blast of the whistle.

Additionally, the hosts are yet to keep a clean sheet at home in the Eredivise and have so far conceded nine goals. Taking into account that the visitors have found the back of the net six times already on the road, count on Heracles to get their names on the scoresheet along with the home team in this one.