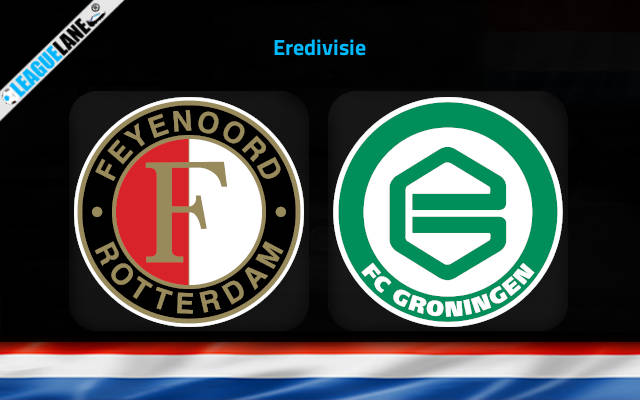 Feyenoord are still six points shy of Ajax at the top of the standings as they failed to take advantage of the champions’ shocking defeat at Go Ahead Eagles last time out.

Slot’s troops will be looking to rebound on Saturday evening when they play host to mid-table Groningen in the 25th round of the competition.

The visitors are 10th in the league table but with as many as ten points between them and the top-seven positions (that take to the UEFA Europa Conference League playoffs next season).

Groningen dispatched Willem II 1-0 on the home patch in the previous round seven days ago. It was the third win in the last five matches for Danny Buijs and his men.

It is also important to note that the visitors have favored defensive-minded approach in the recent fixtures. None of their last three Eredivisie games has thus seen three or more goals scored.

It will be very interesting to see how Groningen’s back line will cope with one of the best offensive lines in the division.

On the other note, we must mention that Feyenoord did lose two of the last four home outings in the league without scoring at all in these defeats (to Vitesse and Ajax).

Feyenoord are heavy favorites here but we do not expect them to demolish Groningen here. After all, none of the last six head to head games saw three or more goals scored and three of the previous four ended without a winner.

Since Groningen have improved their defensive showings of late, we find value in backing the Under 2.5 goals FT pick at the 2.35 odds. Also, Groningen are worth backing not to lose by two or more goals difference at the 1.95 odds here.