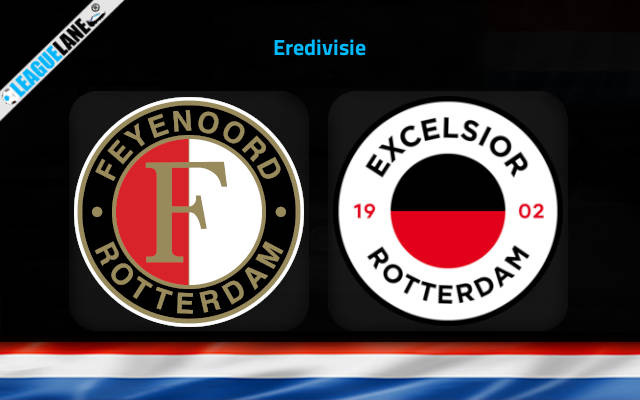 Feyenoord will host Excelsior in the small city derby on Sunday afternoon at Stadion Feijenoord. The two Rotterdam sides will meet each other in the last Matchday before the World Cup in Qatar.

The hosts enter the tie as enormous favorites and anything but their commanding victory would represent a huge upset here.

Feyenoord have been in good touch lately. They eased past Volendam 0-2 on the road last weekend as Danilo and Sebastian Szymanski notched two first-half goals.

The team led by Arne Slot fired as many as twelve shots on target in the 90 minutes of play seven days ago against Volendam.

Feyenoord are now lock on points with leaders Ajax and they will be looking to go on break on a high with an easy three-pointer in front of the home fans.

The hosts should have plenty of room to deliver in the final third past the leaky back line of Excelsior’s here.

The visitors shipped 32 goals in the opening 13 games of the season. They concede three goals on average per game on travels with a record of one win, one draw, and five losses in seven league games on the road.

Only the rock-bottomed Volendam have conceded more than Excelsior’s 32 goals in this term of Eredivisie.

Feyenoord’s forwards could have a field day on Sunday past one of the league’s worst defensive lines.

We see the value in backing the hosts to win both halves at the 2.00 odds, while you can also try to catch the value of the 3.25 odds offered for Sebastian Szymanski to score anytime here.