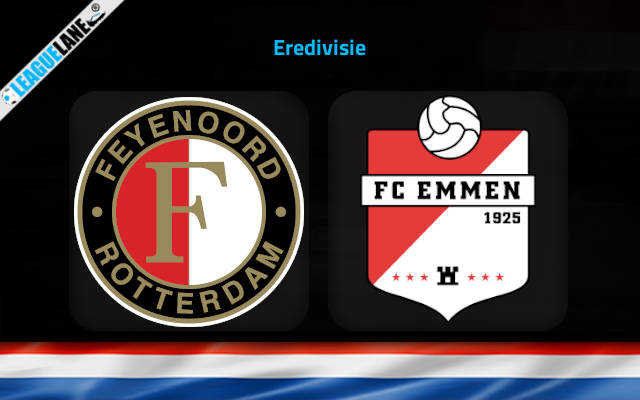 After winning the opening day’s fixture to Vitesse, Feyenoord made it three consecutive outings without a defeat at the start of the 2022/23 Dutch Eredivisie campaign.

Two wins and a draw in the previous three games helped them to climb to the sky-high second position in the league standings. The latest success came on Sunday when Feyenoord saw off Waalwijk 0-1 on the road.

Their defense have only conceded two goals in the three league outings. Feyenoord will have a great chance to keep their strong spell of form going on Saturday evening when they play host to FC Emmen in an Eredivisie match-day.

FC Emmen, on the other side, have won, drew and lost one apiece of their three fixtures so far this season. They have four points from three matches.

It needs to be noted that, their defensive line have leaked seven goals overall this campaign.

This match is a great chance for the hosts to maintain their impressive spell of form at the beginning of this season. They were unbeaten in four of the past 5 overall fixtures. Their current streak of three unbeaten games come inside the process.

On the other hand, FC Emmen were winless in 4 of their past 5 overall games and they are on a 4-fixture losing streak on the road.

Most importantly, FC Emmen have a poor head to head record against this opponent over the years as well.

We can see bookies choosing Feyenoord as their pick. The head to head trend and the current form of the hosts is more than enough to expect a goal feast at De Kuip the coming Saturday.