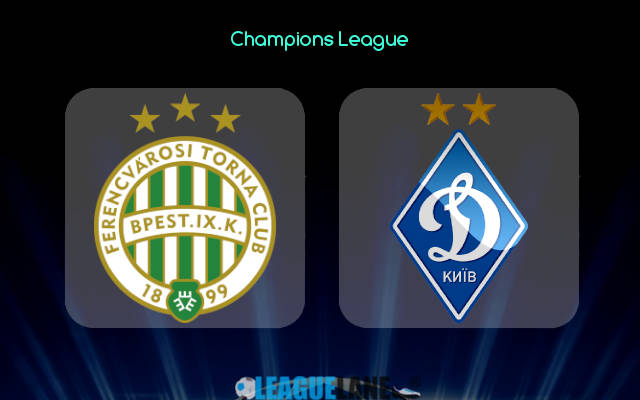 Right after the UEFA Champions League draw for group stages was completed, it was more or less obvious that Ferencvaros and Dynamo Kiev will have very low chances to compete for top two spots against Barcelona and Juventus.

It is more realistic to battle for 3rd spot and extend their appearances on European scene this season, so head to head encounter this Wednesday in Budapest means a lot for both.

In terms of the odds, better chances were given to visitors. Dynamo Kiev are warm favorites to win this match at 2.20 odds, while inexperienced hosts are currently at 3.30.

There were no previous head to head matches between Ferencvaros and Dynamo Kiev in the past.

Hungarian champions have waited so long for this UEFA Champions League appearance. This squad has eliminated so many big teams during the qualifiers like Dinamo Zagreb and Celtic FC, definitely deserving the spot.

The initial appearance at Camp Nou was solid in the first half. However, Barca eventually cracked the defense and won the game convincingly 5-1.

Ferencvaros have recovered during the weekend though, winning the big derby match against Ujpest 2-0 FT. They also lead the race for title in Hungarian league, having collected 16 points from first six games. This team scored at least one goal 15 in out of last 16 games at home across competitions.

Dynamo Kiev haven’t achieved much last week too. They were easily defeated at home stadium by Juventus. They made it to the groups after eliminating Gent and AZ Alkmaar.

We are definitely expecting from both teams to aim for the win in Budapest, which should leave a lot of space on both sides. Both teams to score is going to be one of our safest picks this mid-week.