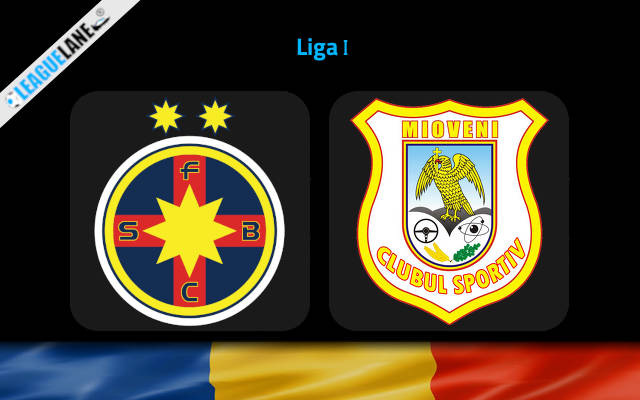 FCSB vs Mioveni Predictions and Free Tips from our expert tipsters when the teams go head-to-head in the Romanian Liga 1 on Monday, 5 December 2022.

FCSB are trying to find their way back to the top of the league standings after falling 6 points behind surprise leaders Farul Constanta.

Meanwhile, Mioveni are desperate for points as they sit at the foot of the table having win just 1 of the 18 games this season.

The teams already met once this season and Mioveni were lucky to draw the game 1-1 after having a humble 29% ball possession.

However, FCSB clearly dominates when this fixture is played at their own backyard having won the last three games on clear margins without conceding a goal.

Who will win the match between FCSB and Mioveni?

The current form and recent h2h stats clearly suggest that FCSB are in a better shape to win this fixture. They are unbeaten in 8 home games in the league this season and are on a three-match winning run.

The visiting Mioveni are on poor form with no wins in the last 9 with the recent four away from home resulting in defeats. They won this fixture at this ground 3-0 last season.

This could be a one-way traffic when a strong home team like FCSB welcome the worst away team in the league. Therefore, we can find some value in backing the hosts to win both half-time and full-time for 1.95 odds.

The over 2.5 goals full-time is a decent alternative with five of FCSB’s last six games registering the same. Also, the hosts have conceded in each of their eight home matches this season while the visitors scored in four of their last five away games.