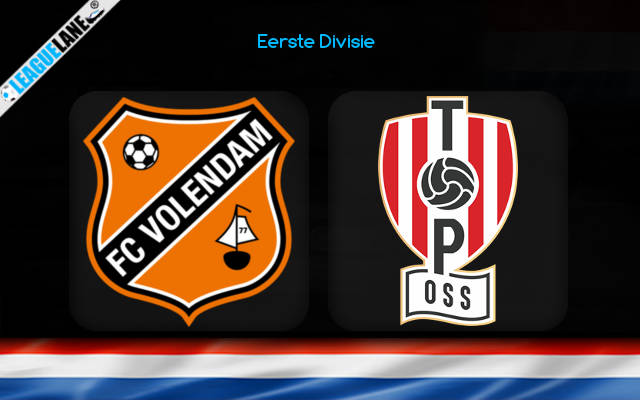 Both teams are without a win since the last 4 games in the league and hopes to change that in this upcoming fixture at Kras Stadion this Friday where the Volendam squad will be hosting Tot Ons Plezier Oss.

Losing twice of their last 4 league fixtures, Volendam remain second in the league with 64 points from the 31 games played. They lost only thrice while winning 18 matches and drawing 10 so far. They tend to let in goals quite often while remaining in the Eredivisie promotion zone.

After two back t back losses, FC Volendam go into this game following a 1-1 league stalemate against ADO Den Haag. They have seen scored against on 5 of their previous 6 games, letting in 12 goals along the way.

On the other hand, TOP Oss is 15th in the league with 32 points. They won and drew 8 games each while losing on 15 other occasions. They are level on points with Telstar who are 2 places below them. With only 39 goals scored in total, they need to improve their attacking front.

After losing to Roda and Dordrecht, TOP Oss tied with the third placed Excelsior by 1-1. They have seen their frailties exposed as TOP has been scored against on all of their last 6 matches, with opponents netting 9 goals overall.

The hosts lost only once from their last 9 games played at home, while winning 7 of them. Volendam’s h2h home fixtures also tells us that, they remain unbeaten in the last 8 games.

Meanwhile, TOP lost twice of their last 3 away fixtures. They even lost 60% of the games played on road this season.

By the looks of things, we envisage a home win this Friday with both sides having enough potential to score.