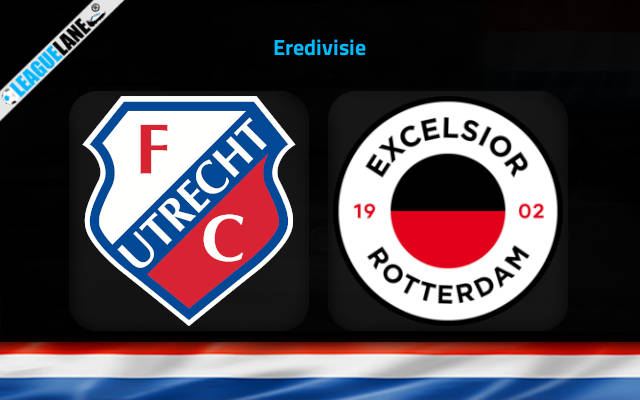 FC Utrecht vs Excelsior Predictions and Free Tips from our expert tipsters when the teams go head-to-head in Dutch Eredivisie on Wednesday, 25 January 2023.

Utrecht are currently in pursuit of a top-seven spot, and as of now they need a surplus of one point to make it happen. Also deserves mentioning is their consistency and performances at home.

Meanwhile, Excelsior have been a total failure on the road. In fact, barring a single draw and a win, they have a 100% losing record on the road. And most importantly, only one team has let in more goals than them in the entire competition.

Utrecht have a dominant h2h record against this rival over the years. The latest encounter ended in a 0-1 win for them on the road, and now they are at home.

They are also on an unbeaten run that stretches back eight years, and in the process they scored two or more goals in 10 of the past 13 meetings.

Most importantly, they won eight of the past eleven clashes at this ground, and are completely unbeaten at this stadium since 2001.

Who will win the match between FC Utrecht and Excelsior?

Utrecht have a 100% winning record in h2h clashes at this stadium since 2001, barring just three draws. They also lost just twice at this ground in all competitions since March of 2022, barring two losses. And these two defeats came against titans AZ Alkmaar, and Ajax.

On the other hand, Excelsior lost five of their past seven games, and they have a 100% losing record on the road this season in all competitions – disregarding one single win and a draw. And this only win came against the dead-last placed Cambuur.

As such, it appears that Utrecht are about to deliver a winning performance this Wednesday.

Only Volendam have conceded more goals than Excelsior this season in the Dutch top flight. And it goes without saying that they let in the most number of goals in road games – 27 from just nine away games.

Moreover, in the past two decades, the hosts managed to score two or more goals in all but two of the h2h clashes at this ground.

Likely, it appears that we are about to witness a high-scoring affair this game week.

Utrecht definitely do have the upper hand this Wednesday, but the last they kept a clean sheet at this venue in any competition was back in September. Meanwhile, in the last four months only once have Excelsior failed to score on the road.

Moreover, 11 of the past 14 overall h2h clashes had goals from both teams as well.

As such, the chances of goals coming from either end of the pitch is high.

Utrecht have a phenomenal h2h record against this opponent over the years, and particularly so at this venue. In fact, barring just three draws here, the hosts have a 100% winning record in the last 23 years.

They are on a good stretch of performances in the league at the moment, while Excelsior have been a total mess on the road. In fact, disregarding their win against the dead-last placed Cambuur, they have a 100% winless record on the road this season.

As such, expect a comfortable win for hosts Utrecht this Wednesday. A -1.5 Asian Handicap on them at an odd of 2.10 would be the optimal choice.

Going on though, the hosts have not been delivering great defensive performances lately, while in spite of all their issues, Excelsior are finding the back of the net – even in games that they lose.

On top of that, majority of h2h meetings over the years also had goals in huge numbers.

By the looks of things, the Both Teams to Score wager at an odd of 1.75 looks very promising.