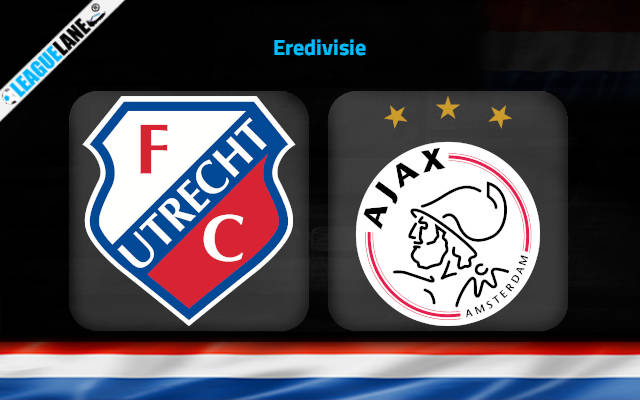 FC Utrecht will play host to the reigning champions Ajax in match-day 4 of Eredivisie at Stadion Galgenwaard the upcoming Sunday.

Naturally, Schreuder’s men are massive 1.40 favorites for the win. They have eventually ended the last season with 83 points, two points clear off the competitors.

Ajax had lifted the Dutch league title the last season and that too in a dominant fashion. They had scored the most number of goals of all the teams in the competition and had conceded the least as well.

The team had performed at an impressive level on the road in their last several appearances and had found the back of the net in plenty as well. It seems that they have extended their impressive thread from the past season.

Ajax won all the three appearances they had so far this new campaign. The team had scored two or more goals in two of the previous three games too.

Meanwhile, FC Utrecht had finished 7th in the league standings past season. They were winless in 22 of their total 34 league games through this stretch.

Going on they have also going through a very worrying stretch of performances lately. They are yet to record a win this season.

On top of that, Ajax have a decent head to head record against this opponent over the years. Judging all these observations it is expected that we are about to witness a victory for Ajax this weekend.

The impressive form of Ajax at the moment and we can hardly expect anything other than a victory for the Jews.

Ajax claimed a 0-3 win over Utrecht the last time here. We are expecting a similar scenario this time around.