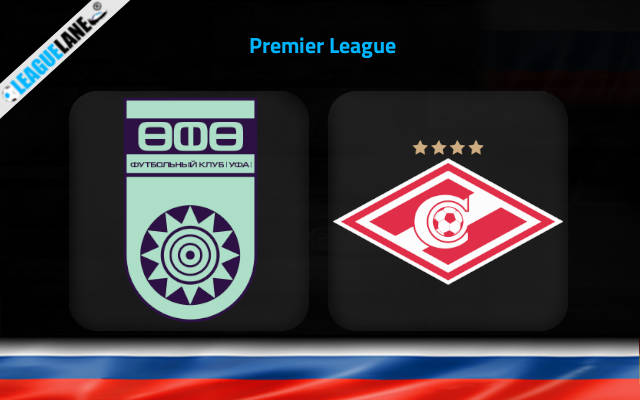 Ufa prepares for this fixture coming off the back of a 2-2 Premier League drawn game versus FC Rostov. From a 2-1 Europa League win with the eclipse of SSC Napoli in their previous fixture, Spartak Moscow head off to BetBoom Arena this Monday.

Ufa sits at the 12th spot with 15 points. Of the 15 matches played, they have only won 3 games while the number of loss and draws share 6 each. Fewer than three goals per match were recorded in 5 of the past 6 fixtures where they have been involved.

They drew the last 2 back to back matches with FK Rostov and Arsenal Tula. They drew 4 matches in the past 5 games while 1 of them ended in a victory.

The visitors sit at the 10th spot with 19 points. Of the 15 matches played, they won only 5 of them while drawing 4. They lost 6 matches with goals to conceding ratio standing at 17:21.

They scored against in 6 of their last 6 games, seeing their opponents hit 13 goals in total. Defensively, Spartak Moscow has seen their frailties exposed. Their last match in the Premier League with Krasnodar ended in a 2-1 loss.

Ufa is in poor home form while the visitors are performing poorly at away. Previous matches between them have averaged 2.27 goals while BTTS has happened 47% of the time. There has been a card inside the first 30 minutes in the last 5 games between the two.

On considering Ufa’s recent non losing streak in 5 games and the visitors unstable form, we back up the home team to emerge victorious or a possible draw will happen at the end of the final whistle.