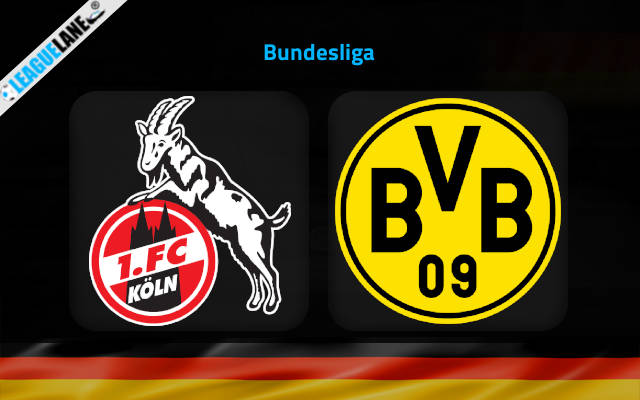 FC Koln and Borussia Dortmund will close the Gameweek No 27 in German Bundesliga on Sunday evening when they take on each other at RheinEnergieStadion.

Dortmund took advantage of back-to-back 1-1 draws for Bayern Munich to cut the gap behind the champions to four points at the top of the Bundesliga standings.

The team led by Marco Rose managed two straight 1-0 wins over Arminia Bielefeld and Mainz in the previous two games within the last seven days.

Although they did not shine offensively, Borussia managed to find the late 87th-minute goal through midfielder Axel Witsel on Wednesday evening away at Mainz.

The good news for Rose is the return of his talisman Erling Haaland who made second-half appearances in both of the mentioned wins over Arminia and Mainz.

Also, Dortmund looked rock-solid at the back in the last two games, limiting Mainz to only one shot on target in mid-week’s fixture at OPEL ARENA.

The clash against Koln away at RheinEnergieStadion will represent a big test for Dortmund since the Billy Goats have a great record in front of the home fans this season.

FC Koln won 7, drew 3, and lost 3 of 13 league fixtures in their own backyard in this term of Bundesliga.

Also, Koln will come into this tie encouraged with a big 0-1 victory at Bayer Leverkusen last Sunday. They are now only five points shy of three teams that share the fourth place in the league standings.

None of the last four games FC Koln played saw three or more goals scored, while Borussia Dortmund will enter this on the back of two straight 1-0 wins.

The Under 2.5 goals FT pick thus looks great at the 2.37 odds. We also like the 2.10 odds offered for the away win pick knowing that Dortmund will be highly motivated to keep ground on Bayern Munich now that they are very close to the Bavarians at the top of the ladder.