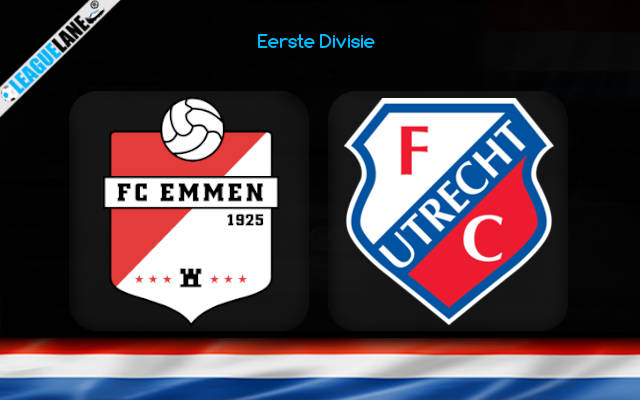 In game week 30 of Eerste Divisie, Emmen faces Jong Utrecht for their next math on Friday at Emmen.

Emmen’s unbeaten streak ended with their loss in the match against Helmond Sport. Helmond Sport’s last-minute decider made sure the opposition couldn’t score an equalizer in the match, ending the match in a win for Emmen with 1-2 FT score.

Jong Utrecht has performed poorly in their matches throughout the season. Their match against TOP Oss ended with the opposition scoring four back-to-back goals within the first half, while Utrecht could score only one.

Emmen is on top form in their matches with only occasional losses. Their strong performances have placed the team as one of the top contenders in Eerste Divisie. They are second on the league table with 55 points to their name.

Jong Utrecht has performed well in their Eerste Divisie matches this season. From the last ten matches, the team has won in only three of them and the remaining matches ending in loss. Their poor performance has put the team in the 14th position on the league table with only 28 points from their 28 matches.

Emmen stays high above Utrecht when it comes to the performance and position in the league. They will be a tough opponent for Jong Utrecht with their current form.

Emmen have satisfied their fans with strong performances in their home matches. The loss in the home match against Helmond put an end to their streak of seven consecutive wins. Jong Utrecht, on the other hand, has not had much luck with their form in away matches. They have won in only two of the ten away matches.

The match will most probably end in a win for Emmen. However, both teams have scored in their previous matches and can be expected to score in this match as well.