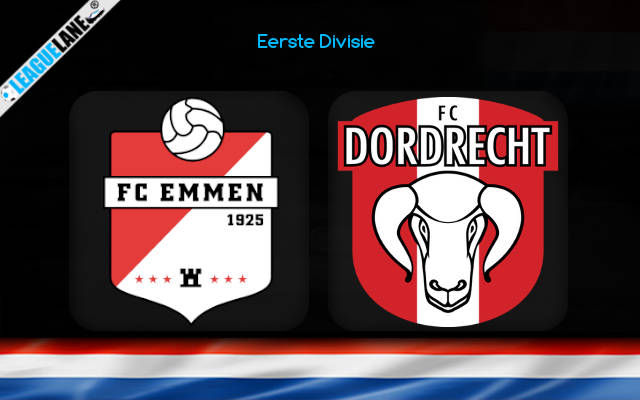 FC Emmen is in the top 4 within the zone for Eredivisie promotion. Dordrecht is at the rock bottom having lost 4 straight matches back to back. The hosts welcome the visitors to their home at De Oude Meerdijk hoping for an easy win in order to climb up the table.

The home side are at the 4th spot having 33 points from 18 games. They lost 5 games while drawing on 3 and winning on 10 occasions. They score less with only 27 in total but have the best conceding ratio in at 14 which stands at top in the division.

FC Emmen has been on a roll, with the tally of goals that have gone past their goalkeeper over the course of their previous 6 outings stands at 3. They are unbeaten in their previous 3 home league matches. They however, lost the last game against Jong Ajax by 1-0.

Dordrecht, are battling to beat the drop, which is not surprising when considering that they have suffered 9 defeats in their last 10 matches. Previous 6 clashes saw a minimum of 3 goals have gone past them. The average number of goals per match is 5.33 while losing their last 6 away matches in a row.

The visitors have failed to keep a clean sheet in their last 26 games and a win for the home team is highly probable as they have 9 wins from the 11 home fixtures this season. The away performance of the visitors is also poor making their chances less likely.