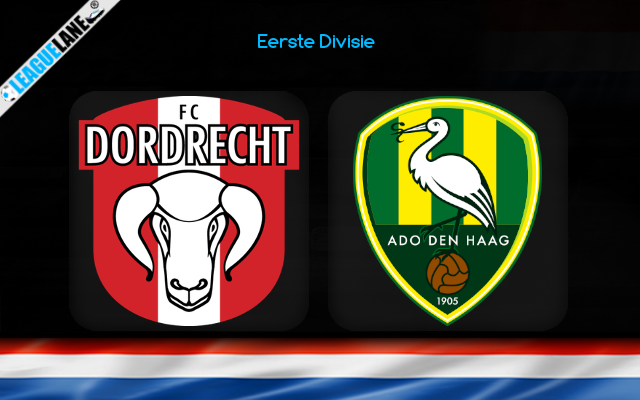 FC Dordrecht vs ADO Den Haag Predictions and Free Tips from our expert tipsters when the teams go head-to-head in the Dutch Eerste Divisie on Friday, 6 January 2022.

ADO Den Haag will be wanting a better result here following a goalless draw against TOP OSS in the previous outing. It was their seventh consecutive winless recording in the league.

Their trip on Saturday to face FC Dordrecht could be an interesting one as the hosts are currently on a similar form as Den Haag’s. Dordrecht were winless in six of the last seven league outings.

ADO Den Haag won seven of the last 10 head to head matches against FC Dordrecht. The latest encounter had finished in a 3-1 win for Dordrecht.

The past four overall wins at this stadium was evenly split, with two each for either sides.

Who will win the match between FC Dordrecht vs ADO Den Haag?

We expect a highly competitive affair between these two on Saturday. And selecting a winner from these two is a bit tough task.

Both these teams have recorded more than 50% of games with over 2.5 goals ft in this season. The defensive side of these two sides are so weak and we can expect a goal fest on Saturday.

Neither of these two teams are having a solid defense and might leak goals. On top of that they both have scored goals even in the games they lost. Therefore, expect goals from both ends of Riwal Hoogwerkers Stadium.

Considering all these observations, we expect a win for ADO Den Haag and like to place it as the main bet at 2.30 odds.

For the second tip, we like to back the over 2.5 goals as these two teams are in possession of a decent attacking side while having a weak defensive steel.