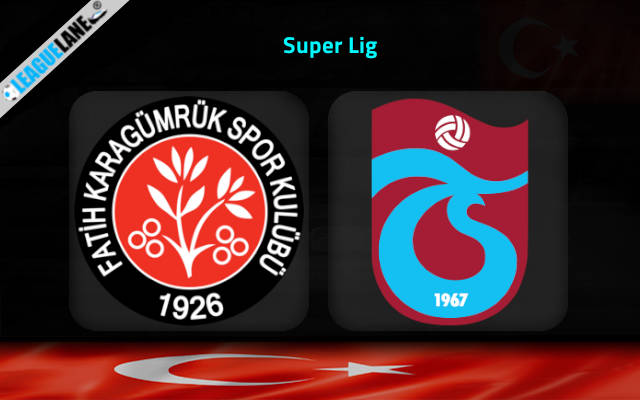 Fatih Karagumruk vs Trabzonspor Predictions and Free Tips from our expert tipsters when the teams go head-to-head in Super Lig on Wednesday, 28 December 2022.

Many Fenerbahce supporters were shocked when their team lost to Trabzonspor last time. Two second-half goals helped Abdullah Avcı’s side seal their seventh victory of the season. A victory in this upcoming fixture will help them reach the third position on the table.

At the same time, Fatih are still in the relegation zone. They lost to Adana by 2-1 last time. They have performed well in the Turkish Cup however, they are struggling to win in the league fixtures.

Back in April, both teams played in a goalless draw. The visitors have won four of the last five head-to-head meetings. At this ground, the host are yet to win a single fixture against this team.

Who will win the match between Fatih Karagumruk and Trabzonspor?

Trabzonspor will most likely win this fixture. The main reason is that they are yet to be beaten by Fatih. At the same time the host are one of the most underwhelming teams in the league this season. They are currently in the relegation zone and are on a four-game winless run. The visitors celebrated a 2-1 victory at this ground back in November 2021.

The visitors have won this fixture by scoring at least two goals in the last four victories.

In the last three head-to-head meetings at Atatürk Olimpiyat both teams have scored on two occasions. We can expect both teams to score in this fixture.

The visitors have won four of the last five head-to-head matches. Moreover, the host are yet to win a game against this team. We can back Trabzonspor to win this game by 2-1 – at 8.50 odd. They have won by scoring two goals in their last four victories.

Our second tip is that Both teams to score– at 1.66. Both teams have scored eight goals combined on the last three occasions.