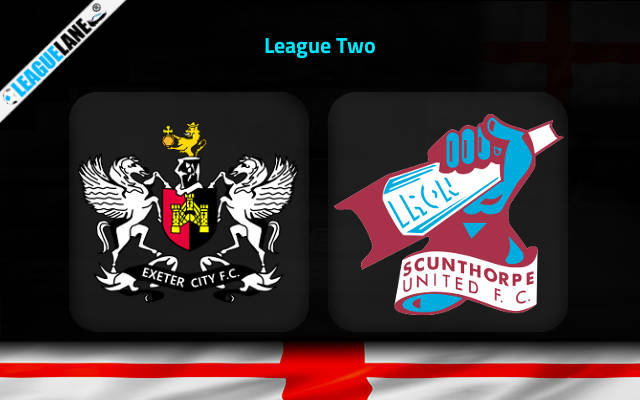 Not seeing a win for the past 6 League Two games, Exeter City are finding it hard to get into the Play offs. Scunthorpe is at the second last position on the table with 2 back to back league losses. They however snatched a win from the past 5 fixtures but are currently fighting the relegation. The hosts can never get another chance to secure a win as they are scheduled to a struggling visitor. The match is set at St James Park this Saturday.

Grecians is at the 9th spot on the standing with 34 points from 23 games. They won 8 times in the league while drawing on 10 and losing on 5 other occasions. They have scored 33 in total while conceding a sum of 26 so far in the league.

Exeter drew the latest league match against Forest Green while they could keep up with Portsmouth losing to 2-3 at the EFL Trophy. They rarely keep a clean sheet and has failed to prevent opponents from scoring in 5 of their previous 6 matches.

On the other hand, Scunthorpe is at the red zone at 23rd position on the table with only 19 points. Of the 24 matches played, they won only 3 games while drawing on 10 and losing on 11 other occasions. They have the worst goals to conceding ratio on the league at 19:42.

Th Irons’ have lost 2 preceding league schedules against Carlisle and Tranmere conceding 5 goals. They have only a single win over the past 9 League Two fixtures and that too came under the rock bottomed Oldham.

Coming into this clash, Scunthorpe United are left without a victory over Exeter when they have played them away from home in the previous 4 league fixtures.

We anticipate a home win this Saturday as the visitors are terrible at away games winning only once in the 13 away matches scheduled this season. Also Exeter City has won the previous 3 h2hs in a row against this rival.