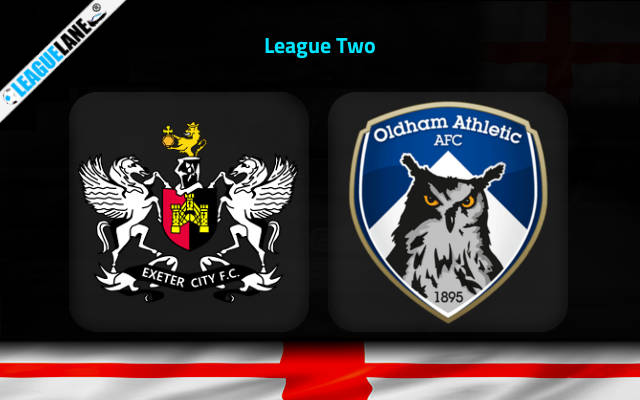 Exeter City has finished in the top half of League Two for the majority of their 9-year long stint at the 4th division. The team competed in the playoffs 3 times during the period, losing in the finals on all 3 of those occasions.

This time around they are pushing for promotion once again and would love to finish within the top 3 spots. They take on a relegation battling side in Oldham this weekend. Read our Preview, Predictions, and Betting Tips with Analysis here.

Exeter vs Oldham Prediction and Analysis

Exeter City has been the toughest nut to crack this season having avoided defeat at all costs and have the fewest losses in the league. They are currently 4th in the table, 5 points behind Forest Green.

The issue with them however is not converting the draws to wins as they have registered 8 draws, which is the highest in the league. To further elevate their fan’s concerns most of the draws have come against teams that are middle of the table.

Oldham on the other hand would love to have the draw record their opponents have registered as they are desperate for points in the bottom part of the table. They are in the 22nd position safe from relegation only on goal difference.

The hosts have not really been clinical and have dropped a lot of points considering their position in the table but they have been better at home and we do not see a team who are in the depths of a relegation scrap and been shambolic on the road taking points from this fixture.

Matt Jay has slowly emerged as one of the best players not only in the team but the entirety of the division. He leads the league’ top scoring charts currently. This is a great opportunity for the Englishman to add further goals to his tally.

Tips for Exeter vs Oldham