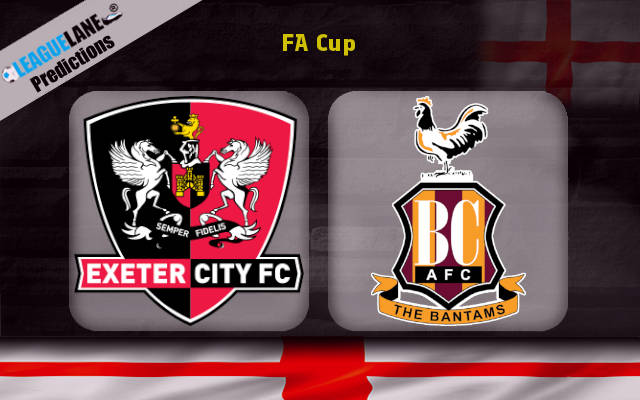 Exeter City hosts the visitors on Tuesday at St James Park in order to find a clear cut winner even after clashing two times this month. A thrilling match is up for cards as they play once more in the FA Cup after a 1-1 tie earlier.

There will be lots of tension in this FA Cup round one replay between both the teams as this is technically the third replay. The home side appeared to have booked their spot in the 2nd round with a 3-0 victory in their 1st replay on November 16. Miraculously, the result was canceled and declared for a replay after it was found that the hosts had used a 6th substitute at the start of extra-time.

Both these team are in the League Two of England with Exeter in 3rd spot and Bradford in 16th on the table. The hosts have a great home record and are unbeaten in the last 8 home matches across all competitions. Their last defeat at home was in the EFL Trophy Cup against Chelsea U21.

FA Cup has nothing to do with league standings and any team can confidently play against each other. Bradford is lucky since Matt Taylor’s side while having 3 goals in hand, made the 6th substitution. But the introduction of Josh Key for Sam Nombe at the start of extra-time made the game to end in a dilemma.

The Bantams has a poor away record having won just twice in their last 9 away fixtures. Their last h2h clash which ended in a 1-1 draw saw Nombe scoring an 86th minute goal for The Grecians.

We are backing the home team to set the record straight and win or draw this match as they have an excellent home record. As far as the last void match is taken into account, the upcoming fixture will be played with utmost importance.