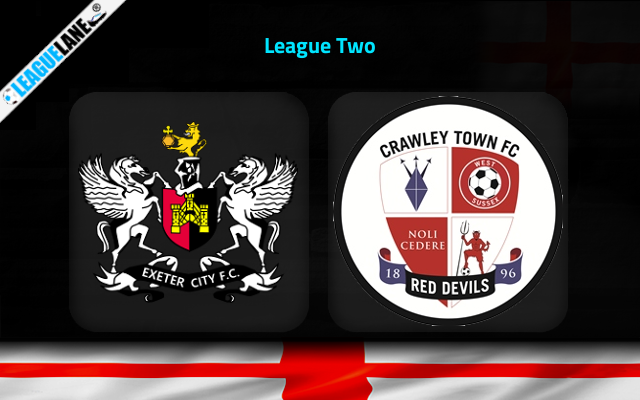 Exeter City have managed to find a spot near the League One promotion zone on the table after recording some positive displays of late. They have collected 8 points from the past five league fixtures to add up to a total of 58 points from 34 league outings this season.

Currently they are just one point away from the third spot and they will be hoping to enter the top three by sealing a win from their next league fixture. They were last seen playing a League Two fixture against Salford. The match ended up in a disappointing goalless draw. However, they are unbeaten in 9 of the past 10 league fixtures.

Meanwhile, Crawley are having a seesaw of form in the league lately. Their present inconsistency resulted in their positioning on the table. They sits 13th on the table with a total of 45 points. They owns a decent attacking side but their defensive lineup have been leaking goals in a worrying fashion.

Crawley lost to Port Vale in their most recent league fixture away from home. The match ended up in a demolishing 4-1 score. With that defeat, they are now winless in each of their past four league fixtures.

By the looks of things, we expect a positive display from the home outfits at St James Park on Tuesday when they meet the traveling Crawley in a League Two fixture.

Exeter City are enjoying a strong spell of form in the league recently. They have only lost once in the past 10 league fixtures. Meanwhile, Crawley are winless in four of the past 6 on road league fixtures.

On top of that, Exeter City owns a better h2h stats in the history of this head to head match-up at this venue. Therefore, we back Exeter City to seal a win from this fixture.