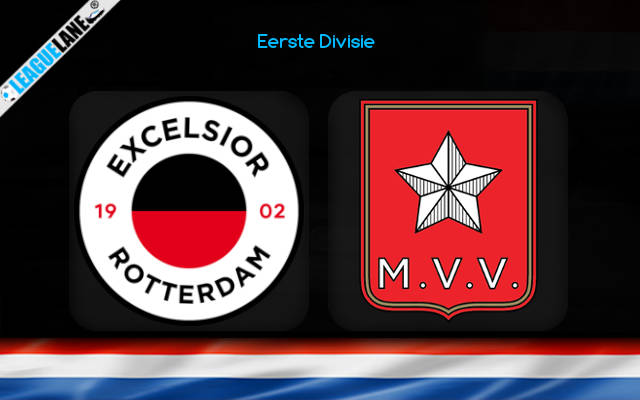 Excelsior is in the second position on the table in the zone for Eredivisie promotion. The Maastricht is at the middle part of the table having drawn the last 2 games hopes to turn the tables as they take a road trip to Van Donge & De Roo Stadion this Friday. The hosts however, look forward to this upcoming fixture with the confidence of 3 back to back wins.

The home side is at the 2nd spot having 38 points from 18 games. They lost 4 games while drawing on 2 and winning on 12 occasions. They score in plenty with 45 in total and has conceded 24 from the last 18 meetings. They have 3 back to back wins against Roda, Graafschap and Jong AZ.

Excelsior have seen their defense breached in 5 of their previous 6 games, shipping 12 goals on the way. As of recent, they are unbeaten in 5 games with winning 3 of those back to back. Thijs Dallinga of Red-Blacks is the top scorer in the league with 25 goals and assists so far.

The visitors reside at the 12th position on the table with 23 points. Of the 18 matches played, they won 7 while drawing on 2. They have the highest number in losses with 9. Their goals to conceding ratio is 21:37 which certainly shows room for improvement in the defensive side.

Over the course of 5 of the last 6 games portraying MVV, a comparatively low number of goals have been scored between them and their opponents. The overall average goals scored per game is just 1.83, with the number of goals averaged by Maastricht stands at 1.

A win for home side is likely to expect as they are in an excellent form although scoring from both sides can be expected.