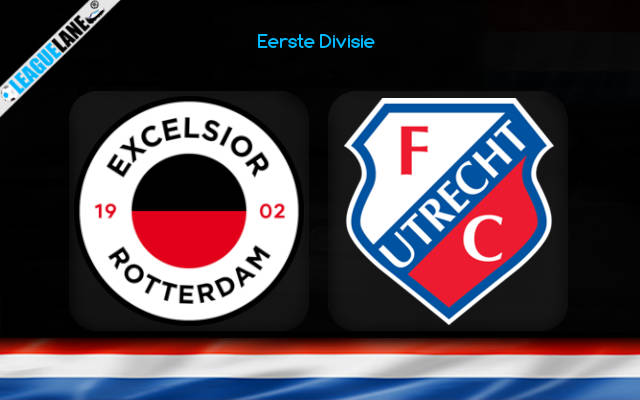 Following on from a losing effort in their last game against FC Volendam in Eerste Divisie action, Jong Utrecht will be hoping to turn things around in the upcoming away fixture. After a dominating win against Helmond, the home team will be hoping for the same result as they set up Van Donge & De Roo Stadion for the visitors this Friday.

Excelsior sits at the 2nd spot on the standing with 32 points. They won 10 games from 16 matches while losing 4 and drawing 2. They have the highest goals to conceding ratio on the table at 41:23.

There have been 3 or more goals scored in total in each of Excelsior’s last 5 home games. Before losing to FC Eindhoven, they had 4 back to back wins. After that match they became unstoppable in the next 3 matches hammering Helmond and Telstar by 5 goals and drawing at min against Almere by 4-4.

Darije Kalezic’s team stands at the 14th spot on the table with 19 points from 16 matches. They won 5 games while losing 7 and 4 of them ended in a draw. They also have more conceding goals than the scored ones.

Their form is declining as of now, not seen a win in 4 games and their last win was against Oss who are currently the second last team on the table. They have been scored against in 6 of their last 6 matches, seeing their opponents hit 13 goals overall.

Utrecht II have won just one of their last 5 Eerste Divisie away while there has been a first half goal scored in each of Excelsior’s last 7 home games in a row.

We expect the home team to score goals, not in plenty but enough to get a win over the guests at Van Donge & De Roo Stadion.