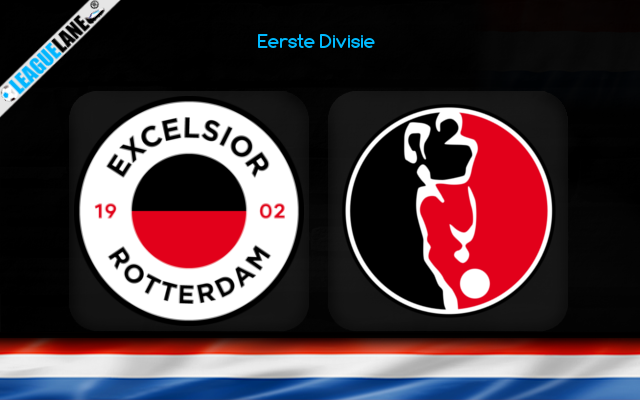 Excelsior have been recording excellent displays of late. They are placed 3rd on the table after collecting 13 points from the past league fixtures, adding up to a total of 59 points. They have the best offensive lineup of this season and a decent defensive steel.

Excelsior played a 1-1 draw against Oss on road in their most recent league match. With that draw, they are now unbeaten in 6 consecutive league fixtures. They will be highest of spirits following such a set of positive outcomes.

Meanwhile, Helmond Sport are not pulling up any trees since the beginning of this season. Their dreadful form pushed them down to the rock bottom of the table. They have a disappointing goal scoring and preventing lineup.

Helmond Sport recorded a 4-0 victory at home against Breda in their most recent league fixture. They ended up their losing streak of three subsequent league games with that win. However, such a win won’t be allowing them to enjoy heavy competitive spirits.

By the looks of things, we can clearly see Excelsior enjoying a strong spell of form in the league lately. Therefore, we expect a win for them when they play host to Helmond Sport in a Eerste Divisie fixture at Van Donge & De Roo Stadion coming Saturday.

Excelsior are on the back of three subsequent league victories at home. They have scored a total of 12 goals in those three home affairs.

On the other side, Helmond Sport have lost four of the past five league fixtures on road. They have leaked two or more goals in each of those four defeats.

We are left to back the home side, Excelsior after analyzing the above stats. The head to head trend suggest both teams to score trend. Therefore, We expect Helmond Sport to score one past Excelsior too.