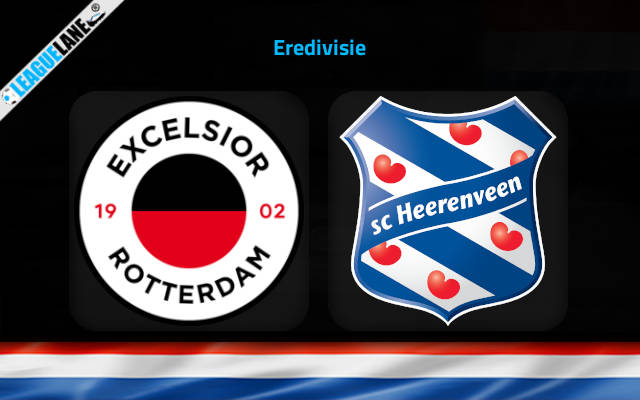 Both Excelsior and Heerenveen ended up their winning streak in the previous round by conceding a defeat. Both the outfits will be determined to have their streak back when they battle on Saturday.

Excelsior conceded a defeat which nullified the previous two victories recorded by them across competitions. They lost to Go Ahead Eagles leaking three goals in full-time.

Their offensive potential are displayed in all the three and at the moment, it’s the defensive line in which the team’s major problem lies. The defensive side had leaked in a total of 11 goals in the previous three league outings.

Meanwhile, Heerenveen won’t want a repeat of their last result here after a 1-2 Eredivisie losing effort against Utrecht.

Matches including Heerenveen have often been seeing goals from their opposition in the past many matches. Their offensive contribution in the same stretch is pretty low.

By the looks of things, expect an interesting affair between these two outfits on Saturday.

Heerenveen have been in an unbeaten form for the past few away matches. They have scored 8 goals in their last three away games. At the same time, Excelsior has also scored 7 goals in the last three home games.

Looking at the head to head tradition of both these outfits, there is no doubt that Heerenveen has the upper hand. In addition, they are four points clear from their counterparts Excelsior in the league standings.

Considering all these observations, expect a victory for the visiting side Heerenveen on Saturday.