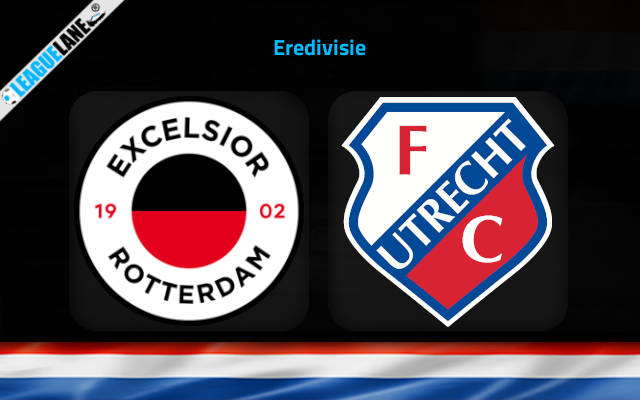 Both Excelsior and Utrecht are without a win in their most recent league match. This Sunday they will both go head-to-head at Van Donge & De Roo Stadion for Matchday 8 of the Eredivisie.

Newly promoted side Excelsior have started the new campaign on a good note. However, their performance have gone downhill. Following three back-to-back losses in the league they managed to win against Emmen by 2-1.

However, they again fell to Fortuna Sittard most recently. Fortuna were down to ten men after the 77th minute of the game, yet Marinus Dijkhuizen’s side could not make most of it.

Following a run of winless matches, they are now placed at the tenth spot on the table.

Meanwhile, the visiting team also have a similar story this season. Both teams are tied at the same points on the table ranking. It needs to be mentioned that, they are now on a three-game unbeaten streak.

In their most recent league outing, they had to settle for a goalless draw against NEC. In that game, Henk Fraser’s side managed to register seven shots on goal however they could not find the back of the net once.

In the Eredivisie this season, both these clubs share one common aspect. In the list of top ten teams, only these two sides have a negative goal difference this early into the season.

Moreover, it is worth knowing that the host have conceded seventeen goals in just five matches. This shows that they are having a difficult time in the Dutch top-flight.
Also, the goal conceding rate for the host is 2.57 goals per game.

The visiting team have won only two games this season. Both these victories were against bottom-side clubs.

Our prediction is that Utrecht will win by 3-0 – at 15.00 odd. This is after considering that the visitors have won this fixture by a three-goal margin in two of the last five matches against Excelsior. Also, it needs to be mentioned that the host played in the second division last year.

Our second tip for this game is that Over 2.5 goals with Both Teams to Score – the odd for this combined tip will be at 1.80 odd. Both sides have scored in six of the last seven meetings. Also Over 2.5 goals have been scored in three of the previous five encounters.