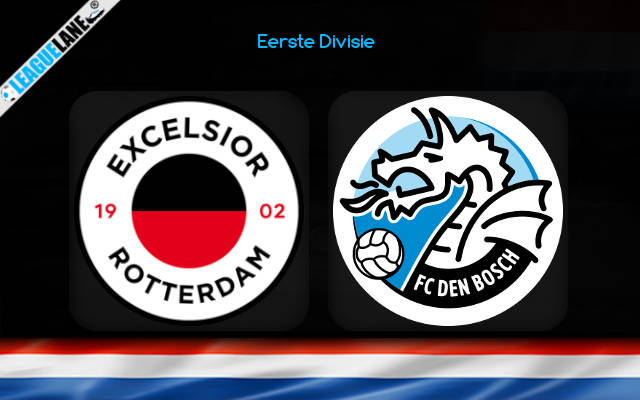 Game week 29 of Eerste Divisie brings us the match between Excelsior and Den Bosch on Friday at Rotterdam.

Excelsior played their last match against Roda JC, in which Excelsior scored two goals while Roda could score none. The match ended with 2-0 FT score.

Den Bosch played against De Graafschap in their last match. In the match, both teams couldn’t score a single goal in the match, ending the match in a goalless draw.

After a couple of losses, the team is back in-form. Excelsior is back on their win-streak and has lasted without a loss for the last three game days. The recent wins have helped the team move up the table to the third position on the league table with 52 points. They will look to keep their win-streak going and will hope for a win in this match.

Den Bosch has not been in their best form in this season. Apart from two draws, the rest of the last ten matches have ended in losses for them. They have also failed to score in six of their matches as well. Looking at their standings, Den Bosch stays on the bottom half of the league table with 27 points from their matches so far.

Excelsior has shown a great spell in the last few matches. The team is back in their form and has found wins in the last three matches, earning over 1.5 goals in two of them. Den Bosch has played poorly in their matches recently. They are winless in the last eleven matches as well.

Excelsior has shown a good form in their home matches. From all the matches they have played, the team has secured seven wins, three draws and four losses while Den Bosch’s away matches have not been as productive as they had hoped. The team has found only two wins from their away matches so far.

Looking at the performances, the match is most likely to end in a win for Excelsior. The last two matches for Excelsior have ended in clean sheets and can be expected to do so in this match as well.