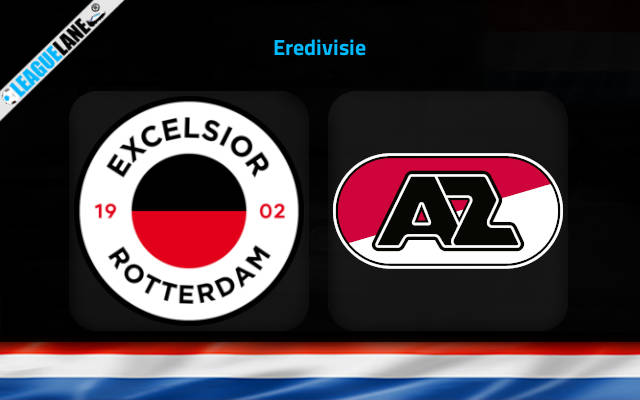 AZ Alkmaar dropped from the top of the table to the fourth position in the Eredivisie standings after the 1-3 defeat to Feyenoord in the last weekend’s derby.

It was the team’s maiden defeat of the 2022/23 season and it will be very interesting to see how the players will react in the following game having previously won seven and drawn two of the opening nine outings.

The team led by Pascal Jansen will have a chance to rebound on Sunday when they are set to open the daily Eredivisie schedule with the away fixture against mid-table Excelsior at Van Donge & De Roo Stadion.

Excelsior will not enter the tie in any higher spirits after a demolishing 7-1 defeat to Ajax in Amsterdam.

It was a one-way street from the get-go as Excelsior had to face as many as 20 attempts on target on the occasion. Their keeper conceded seven goals but yet had as many as 13 saves in a match.

Excelsior now have the second-worst defensive record in the whole league with 27 goals shipped in the inaugural 10 rounds.

This will be the music to the ears of Jens Odgaard who is AZ’s top scorer this season with five goals. The Danish attacker was also on target in the mentioned loss to Feyenoord seven days ago.

AZ will be highly motivated to bounce back from the loss to Feyenoord last Sunday. They should have plenty of space to deliver past the leaky defense of Excelsior’s here.

We will back the visitors to win both halves at the 3.00 odds, while we also like Jens Odgaard to score anytime for them at the 2.10 odds here.