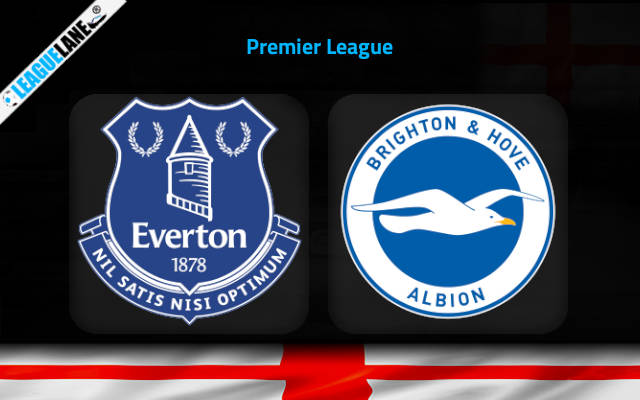 Everton is going through arguably their worst run of games in a period close to two decades, having lost seven of their previous ten league fixtures.

Brighton despite not ending up on the winning side of things as often in the season has been one of the toughest teams to take all three points from.

The Blues in their most recent match were able to hold Chelsea to a 1-1 draw away from home. They were unfortunate to have not been able to carry on their momentum following the brilliant result in the midst of such a crisis as they had their following three fixtures postponed.

Disregarding the win against Arsenal the club has lost the 5 fixtures preceding their trip to Stamford Bridge. Consequently, the club is 15th in the league, eight points clear of the relegation zone.

The Seagulls meanwhile snatched a point in their fixture against Chelsea this midweek, as Danny Welbeck scored a 91st minute equaliser ending the match with a 1-1 score line.

This was their 3rd draw in five league fixtures. Also registering a win and a loss from those fixtures, the club is currently 10th in the league, five points ahead of their opponents for Sunday.

With just a win in their last eleven fixtures and five fixtures at Goodison Park, the hosts are not in a form to go into the match as favourites despite a favourable h2h record.

While Brighton is winless in the last eight fixtures across all competitions and seven league fixtures, the club lost just once in that period.

With this incredible resistance by the Seagulls against defeat along with the shambolic form of the hosts, I don’t think the Toffees will gain more than a point from this fixture.

Albion’s last three away fixtures have ended with a 1-1 score line. Backing the score line currently priced at the odds of 6.50 does not sound like a bad shout.