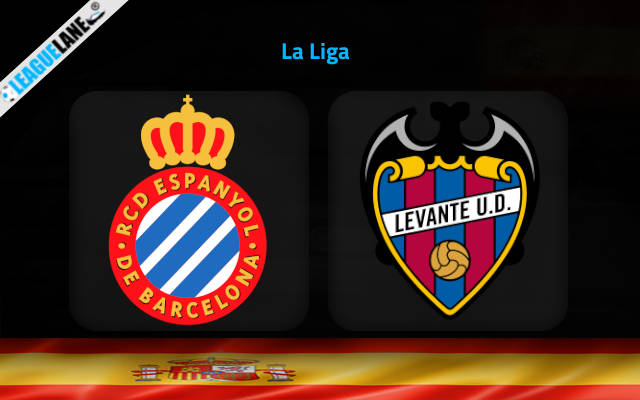 Our tipsters expect a tight match when Espanyol welcome Levante for the Spanish La Liga clash on Saturday. However, Raúl de Tomás and co have a better chance of leaving the RCDE Stadium with three points.

Espanyol come here on the back of mixed results. Their their last five games produced 2 wins with the remaining 3 resulting in losses which include the narrow 1-0 defeat to Vallecano last weekend.

But this team managed by Vicente Moreno is a confident group while playing in front of their own fans. They are on a six-match unbeaten run at this ground, all started with a 1-0 win over Alaves after failing to win in any of the first five home games. The bagged two big scalps during the period, first against Real Madrid and then against Real Sociedad.

Meanwhile, Levante are relegation bound and remain at the foot of the table with 8 points. They are yet to register a league win this season, though a quick turnaround can save them with the safe zone at 7-point gap.

To make things worse for the visitors, there is a managerial merry go round going on at Valencia. Paco López was sacked in October and his replacement Javier Pereira is dismissed following the 1-3 defeat at Betis two weeks ago.

Relatively unknown and former B-team coach Alessio Lisci is appointed on an interim basis. His start in the dugout is decent, a goal-less home draw against big hitters Osasuna.

Away from home, Levante lost five consecutive games, conceding 3 or more in three of them. The 1.90 odd on home win therefore offers good value for punters and they have defeated Levante in 2 of the last 4 La Liga games.

Espanyol are slightly better in h2h comparison as they posted 4 wins in the last 10 across all competitions as against 3 wins by Levante along with 3 draws.

Levante is under the tutelage of a third manager this season and the massive task of saving them from relegation is handed to an inexperienced Alessio Lisci. This will be a tough afternoon for the visitors with Espanyol’s reputation as a formidable home team. Punters will not make a mistake by backing the hosts to take full points here.

I am very impressed by Raul de Tomas this season. He has scored in six of the last 7 home games for the Blanquiazules and earned his call to the national team for the qualifiers in November. He is our red-hot pick to score anytime against Levante on Saturday.