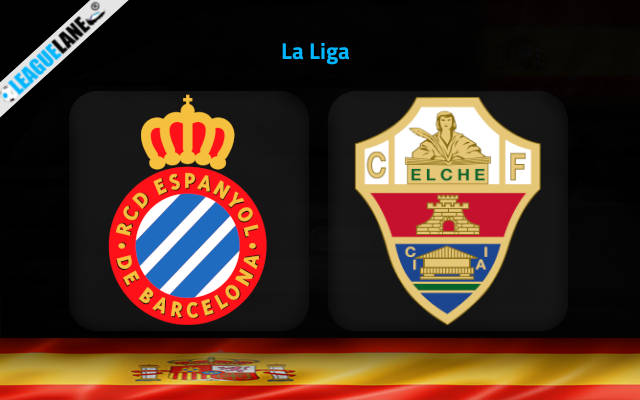 Espanyol will host Elche in the first game of Sunday’s La Liga program at RCDE Stadium. The hosts enter the tie as pretty big favorites and for a good reason considering their rivals’ dreadful spell of form.

Elche are the only team in the league without a win after ten rounds of the competition. They sit firmly at the very foot of the standings with just three points in ten outings.

The team made a managerial change recently as new head coach Jorge Almiron debuted with a promising result against Valencia (a 2-2 draw at Estadio de Mestalla) last weekend.

Elche, however, could not do much to prevent the certain defeat to reigning champions Real Madrid as the current La Liga leaders eased past them on Wednesday evening at Estadio Manuel Martinez Valero.

Elche shipped three goals in mid-week and five in the last two games against Valencia and Real Madrid. They have the worst defensive record in the league with 24 goals allowed in 10 matches.

This will be the music to the ears of Joselu who already has seven goals for Espanyol in this term of La Liga.

The Spanish forward was on target seven days ago as he made the difference in the home clash against Valladolid.

The last weekend’s 1-0 success at home was only Espanyol’s second victory of the season. Can they pick up the third against the weakest team in the league on Sunday?

Both Espanyol and Elche have been playing attacking-minded football at the beginning of the season. The hosts conceded at least two goals in four of the previous six league outings.

Elche have the worst defensive record in the elite tier of Spanish football. We will take Espanyol to win & Both Teams To Score bet at the odds of 3.75. We also like the 2.20 odds offered for Joselu to score anytime against Elche’s back line.