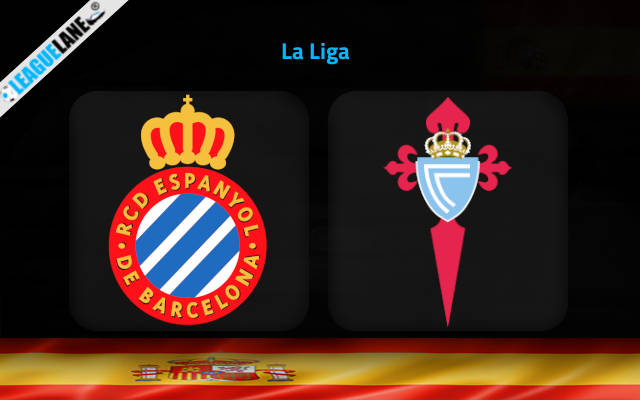 Mid-table rivals Espanyol and Celta Vigo are set to take on each other in the 31st round of Spanish La Liga on Sunday afternoon at RCDE Stadium.

There is nothing to separate these two outfits after 30 rounds of the competition in the elite class of Spanish football.

They sit level on 36 points, sharing the 11th position in the table, and having pretty much nowhere to go in the remaining eight games of the campaign.

Espanyol do have more reasons for optimism going into this tie, namely because of their fine home form in this term of La Liga.

Vicente Moreno’s men will enter this clash unbeaten in four successive home fixtures in the league. It is a respectable thread if know the opposition included the likes of Barcelona and Sevilla along the way.

Moreno’s men have kept back-to-back clean sheets at home in the wins over Getafe and Mallorca.

Their back line looked great in the last weekend’s game against Real Sociedad as well, bit Espanyol got unlucky to concede a 96th-minute goal and eventually lose 1-0 at Reale Arena in Donostia-San Sebastian.

Celta Vigo also lost their respective game last weekend, falling 1-2 at home to Real Madrid. The team led by Argentine manager Eduardo Coudet could not have hoped for a better scenario when the referee blew three penalties against them.

Karim Benzema converted two which was still enough for a win at Balaidos for Ancelotti and his troops.

Celta Vigo lost four and drew two of the last six away fixtures across competitions. They also have negative tradition in the away clashes against Espanyol.

Everything points towards a pleasant afternoon for the home fans at RCDE Stadium and we have to recognize a strong value in backing Espanyol to win at the 2.75 odds.