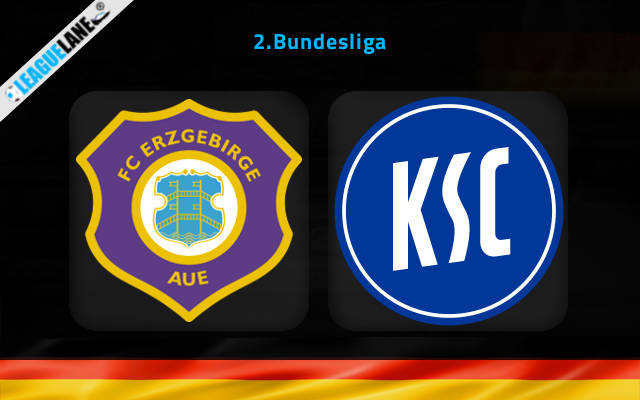 Currently battling the relegation to 3. Liga, Aue’s much needed win on the previous game has given them some confidence. After their 4 consecutive league losses, the home side are slowly building up momentum as they are unbeaten in the last 2 fixtures. Karlsruhe are in search for a win since the last 3 league fixtures, but have lost only once from their last 5 league schedules. With 15 points and 7 places apart, KSC will travel to Sparkassen-Erzgebirgsstadion in Aue for the 27th Round of 2. Bundesliga.

The Violets are at the 17th spot on the standing with only 19 points from 25 games. They won only 4 times in the league while drawing on 7 and losing on 14 other occasions. They scored 24 in total while conceding a sum of 48 which shows some room for improvement in defense is much needed.

Erzgebirge Aue will come into the meeting following a 1-0 league win over Regensburg in their prior fixture. They have been scored against on 5 of their previous 6 clashes, giving away 16 goals in the process.

On the the flip side, KSC resides at the 9th position on the table with 34 points. Of the 26 matches played, they won and lost 8 games each while drawing on 10 other occasions.

Last time out, Karlsruhe drew a 1-1 tie with Regensburg which came after their defeat against St. Pauli. They scored 11 times in their previous 6 matches while the manager Christian Eichner will no doubt take that as a positive sign as the side have had their own issues at the back, conceding in 5 of those same clashes.

The hosts have won just 4 of their last 26 matches across all competitions while KSC have lost all of their last 6 away games against Aue in all venues. We feel that a win for Karlsruhe or a draw might be up for cards as, the home side lost 5 of their last 6 games played at Sparkassen-Erzgebirgsstadion.