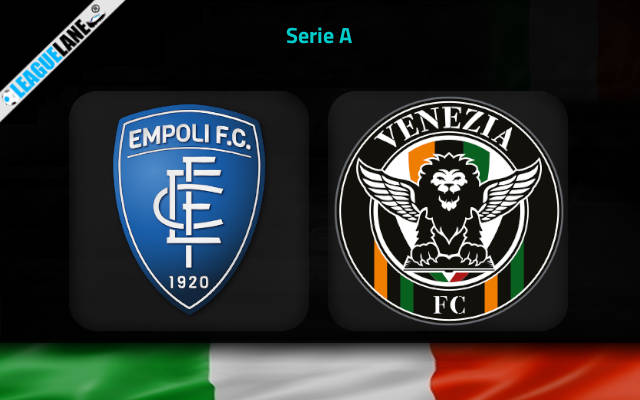 Both Empoli and Venezia were promoted to the top flight at the end of the last season, and were expected to struggle. The latter did do as anticipated, and have been on a losing run so far. However, Empoli have gained an upper hand with some good performances against some of the best teams in the Serie A, and definitely are the favorites for this weekend.

Right away after their promotion, Empoli were given some tough teams to start their new league campaign. Not only did they manage to score in each one of these fixtures, but they also managed to defeat Juventus – and that too on the road.

Going on, the team were the champions of Serie B in 2020-21, and had scored the most number of goals of all the teams in the competition.

In the meantime, Venezia are placed dead last in the table, with a perfect losing record. They are yet to score their first goal in the Serie A, and their record on the road has been a bit concerning lately.

By the looks of things, expect a win for Empoli.

Empoli had registered a 0-1 win on the road the last match-day, against Juventus. In the meantime, Venezia lost 3-0 on the road against Udinese.

Going on, Empoli had won seven of their past ten overall fixtures, and they had scored a total of 28 goals from their past eight matches. Do also note that they had won eight of their former ten appearances at home.

On the other hand, their opposite number are on a three-game losing run, as well as a five-fixture winless streak. Moreover, they were also winless in 11 of their past 15 road trips.

Taking into account these observations, expect a win for Empoli. However, do understand that Venezia are desperate, and they are after all a team that went through playoffs to get promoted.

They are well-versed with playing under pressure, and importantly, they have a good h2h record against this foe.

As such, expect Venezia to find the back of the net at least once.