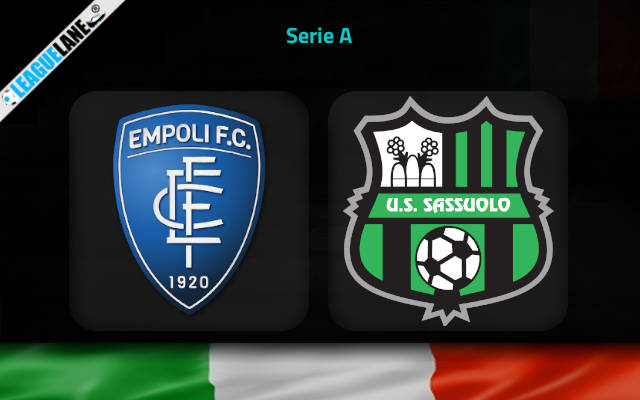 Empoli and Sassuolo will raise the curtain on Saturday’s Serie A schedule with their 13th round fixture at Stadio Carlo Castellani.

Both teams suffered expected defeats to some of the league’s heavyweights last weekend and are hoping to make amends when they come across each other.

Empoli did little to prevent the subsequent defeats to Juventus and Atalanta in the previous two rounds.

They have failed to find the back of the net in the process, conceding as many as six in these two games.

Sassuolo have not been any better in their tough 4-0 loss away at current leaders Napoli seven days ago.

It was the third defeat in the previous four league matches for Alessio Dionisi and his troops but we must say they have faced the likes of Inter Milan, Atalanta, and Napoli along the way.

On another note, Sassuolo have only scored four goals in six away games this term. They are now up against Empoli who are among the weakest attacking teams in the league with 9 goals from the inaugural 12 Matchdays.

Unlike Empoli, Sassuolo do have a man with more than two goals to his name this season. His name is Davide Fratessi who bagged four goals so far in the campaign.

Both Empoli and Sassuolo are struggling for goals going into their head to head meeting in the 13th round of the competition. It is very hard to separate the two outfits at the moment which is why we see the stalemate as the most likable of the three outcomes on Saturday.