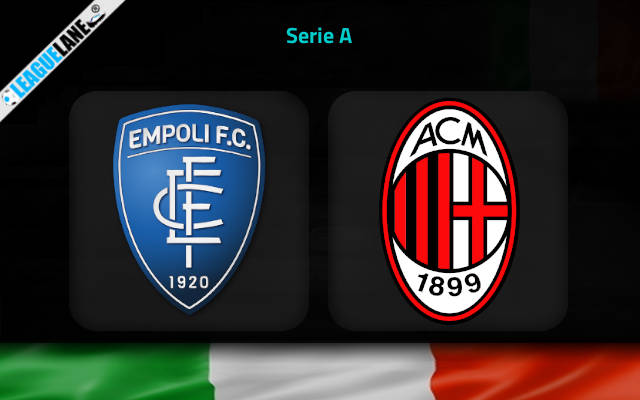 AC Milan suffered their maiden defeat of the season two weeks ago when they fell 1-2 at home to Napoli in the derby of the Matchday.

They will be looking to rebound after the international break with the away fixture against Empoli scheduled for Saturday evening at Stadio Carlo Castellani.

Empoli broke a thread of their own, picking up their inaugural win of the season two weeks ago when they saw off Bologna 0-1 on the road.

Midfielder Filippo Brandinelli got his second goal of the season to make the difference against in-form Bologna away at Stadio Renato Dall’Ara.

Empoli jumped to the 14th place in the league ladder as a consequence. Nevertheless, head coach Paolo Zanetti can still be worried regarding his team’s offensive output which has been fairly modest so far in the season.

Empoli notched only six goals in the inaugural seven rounds of the 2022/23 Serie A campaign. They are now up against one of the best defensive lines in the country and we are not quite optimistic regarding their chances for success here.

If we also count the Coppa Italia loss to SPAL in August, Empoli have two draws and two losses in four home outings this season.

On the other side, AC Milan are unbeaten on the road, a streak that includes the 1-1 stalemate against Salzburg in the UEFA Champions League.

It is hard to bet against AC Milan here based on the quality and the head to head record. The away win is priced at the 1.55 odds at the moment.

You can also try with the Under 2.5 goals FT bet at the 2.00 odds since we expect AC Empoli to sit deep defensively and wait for their chances from counter-attacks, pretty much what they did last time out against Bologna.