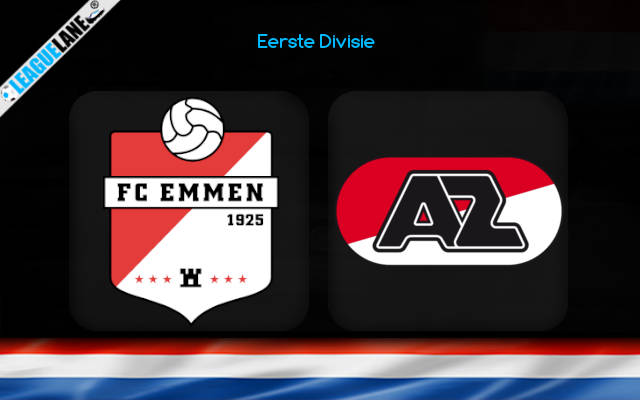 Emmen came from behind to score an equalizer in the match by the end of the first half. Both teams couldn’t score in the second half, ending the match with 1-1 FT score.

Jong AZ played their last match against Roda JC. Roda JC scored the only goal of the match in the 76’minute and remained in the lead for the rest of the evening. The match ended in a loss for Jong AZ with 0-1 FT score.

With the loss in the last match, AZ Reserves’ win-streak has ended. The team has played poorly in their match and had achieved wins only occasionally. However, they have played well in their recent matches and won consecutively in four matches. The team stands 12th on the league table with 38 points to their name.

Emmen has played very well in their matches and is unrivalled in their position at the top of the league table. Even though AZ Reserves have played well in their recent matches, they can go back to their old form at any time, leading to cold streaks for the team.

Emmen have the advantage of playing in their home ground, where they have achieved some excellent results. The team has lost in only one of their last ten home matches; the rest has ended in wins. Jong AZ’s recent away matches show the team with two consecutive wins.

Emmen is without a doubt the better team of the two and has more chance of sealing a win than Jong AZ. Emmen has scored most of their goals in the first half of the match and can be expected to score in this match as well. Rui Mendes is a player the opposition should look out for. He has played well in the recent matches and has scored in the last five matches.