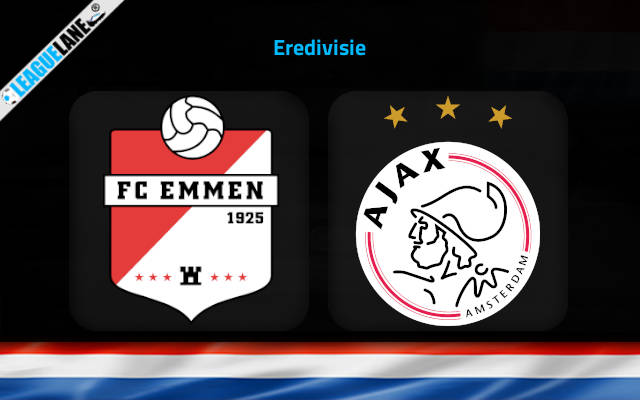 Emmen got their second win of the season and now they are just one win away from leaving the relegation zone. However, their opponents this time are Ajax who are one of the best teams in the Eredivisie this season.

Ajax played a great game last time against PSV however, they could not win that game. Two goals from Luuk De Jong and Erick Gutiérrez helped PSV clinch their tenth win of the season. Now Alfred Schreuder’s side are currently at the second position following this result.

We can expect the visitors to play a very attacking game against Dick Lukkien’s team as their first objective is to take an early lead. This is what they lacked in the game against PSV.

It is worth knowing that the last time the host won a home fixture was way back in August.
One positive aspect about this team is that they are on a two-game unbeaten streak despite being in the relegation zone.

The host have made decent progress towards the end of October, the got through the first round of the KNVB Cup competition. Also, they got their second win of the season recently.

Our prediction is that Ajax will win by 3-0 – the odd for this tip will be at 9.00. The visitors have won their last four meetings at De Oude Meerdijk by scoring at least three goals.

Our next tip for this game is that Ajax will keep a clean sheet – the odd for this tip will be at 2.20. The visitors have an excellent defensive record against Emmen as they have kept a clean sheet in their last three consecutive overall head-to-head matches.