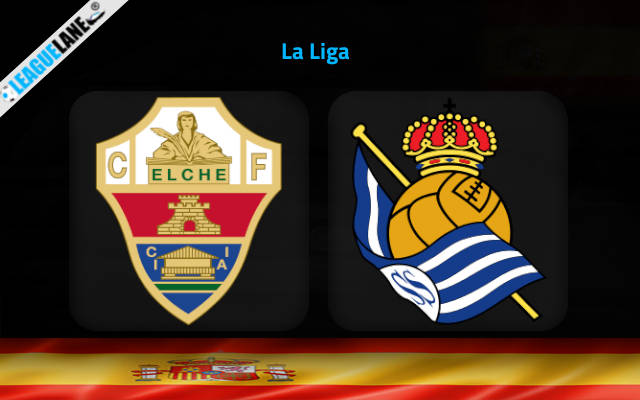 Real Sociedad could not do much against an inspired Barcelona side last Sunday at their Reale Arena (formerly known as Anoeta).

Blaugrana were particularly dominant in the second half of the affair, following Xavi’s substitutions and the introduction of Ansu Fati.

The Basques shipped three second-half goals without offering an adequate response and they now sit at a win and a defeat after two rounds of play in the 2022/23 La Liga campaign.

Imanol Alguacil’s men will be looking to rebound on Saturday afternoon when they travel to Estadio Manuel Martinez Valero to take on Elche in the third round of the competition.

Although Elche took just one point in their inaugural two matches of the season, this will be a tricky trip for Sociedad.

Elche have lost only 6 of 19 home outings in the previous term of La Liga. They have had a 24-21 goal difference in the process proving out to be a tough nut to crack in their own backyard.

Head coach Francisco can’t be thrilled with the form his men have shown in the earliest stages of the new season, especially when it comes to their attacking performances.

Elche notched just one goal in the inaugural two rounds and they had no more than three shots on targets in Monday’s 1-1 home draw to recently-promoted Almeria.

The Under 2.5 goals FT pops up as the best betting option here. Elche have not done much in the final third in the opening two games, while Sociedad have also scored only a goal apiece in the clashes against Cadiz and Barcelona.

You can back the Under 2.5 goals FT bet at the 1.66 odds, while Real Sociedad to keep a clean sheet is another decent option at the 2.25 odds.