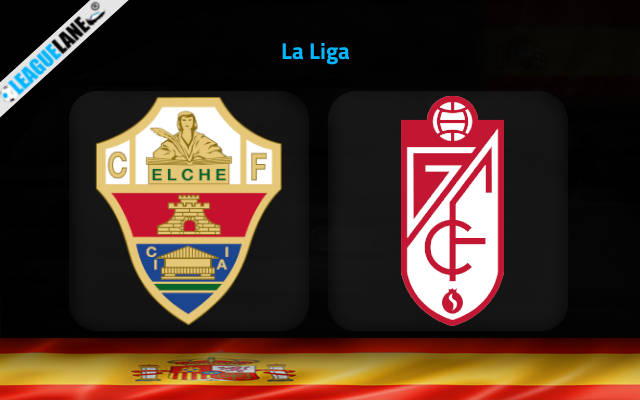 Granada suddenly caught the right form in the finish of the last year to make it five straight matches without a defeat in La Liga.

They have won three and drawn two along the way and climbed up to 12th place in the league standings as a consequence.

The latest of their successes came against the likes of Atletico Madrid as Darwin Machis and Jorge Molina bagged goals in a comeback at Estadio Nuevo Los Carmenes.

Molina has been on fire lately. He was on target in each of the last three La Liga games, bagging as many as five goals in the process.

Molina should have plenty of room to deliver on Sunday afternoon when Granada travel to Estadio Manuel Martinez Valero to take on bottom-half rivals Elche.

Elche have won only one of the last ten league outings. They will come into this on the back of consecutive losses to Valencia and Barcelona, both on the road.

Francisco’s men have not been very meticulous at the back of late. They shipped five goals in the last two losses.

The hosts failed to keep a clean sheet in ten successive La Liga affairs. This will be the music to the ears of Jorge Molina who will be looking to find the back of the net in fourth consecutive La Liga game.

Granada go into this as form favorites and they have tradition on their side as well. Elche have been relatively easy to break down and we can hardly see them keeping things quiet at the back against the in-form offensive line of Granada’s here.

The away win is the main betting option at the super-attractive 3.20 odds, while you can definitely also try with Jorge Molina to score anytime for the visitors at the 3.25 odds.