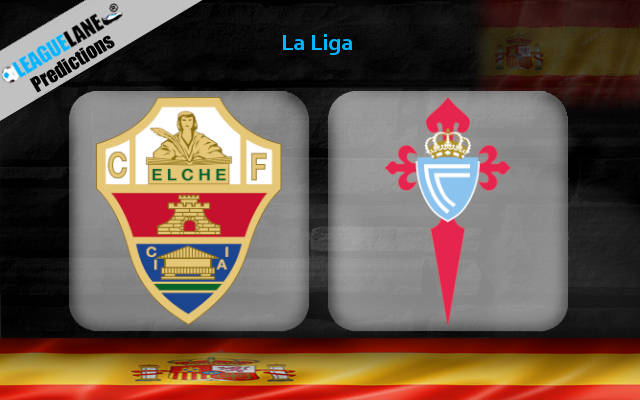 Elche is a promoted side but has shown great promise in the Spanish top tier this season. They are one of the handful teams that have won more than half of their La Liga clashes being the underdog.

Their arrival onto the campaign has been announced well by picking up 10 points from their six league appearances so far this term.

They will return home after a 3-1 loss on the road to Betis last time out in the schedule.

Having won only one of their eight La Liga fixtures in the schedule this season until now, Celta Vigo doesn’t pose a huge threat to the home team.

Besides, the Celtics have won none of their last seven outings in the schedule. With three draws and a win, the visitor has picked up 6 points in the table.

They will visit on the back of a 1-4 loss at home against Real Sociedad in the campaign.

Elche has made a strong impression on their return to La Liga, which gives them a slight advantage despite being a promoted side this term. The host has averaged above one goal in both scoring and conceding in the table, showing that they have a decent form in the campaign.

We can consider Celta Vigo being on a downward slope in their form. The Celts have won only one of their eight league clashes so far this season. This says trouble for the visitors in the upcoming match and also in the contest this term.

The double chance favoring Elche will probably be the best bet for the punters. Even though the visitors might be the ideal choice with league experience, there is nothing to worry about the confidence of the promoted team which they have proved in the prior fixtures in La Liga.

Furthermore, the tip for Celta Vigo to not keep a clean sheet in the match has been picked as another suitable option in ninety minutes. The reason to back the tip is the poor away form of the Celts in the campaign this season.