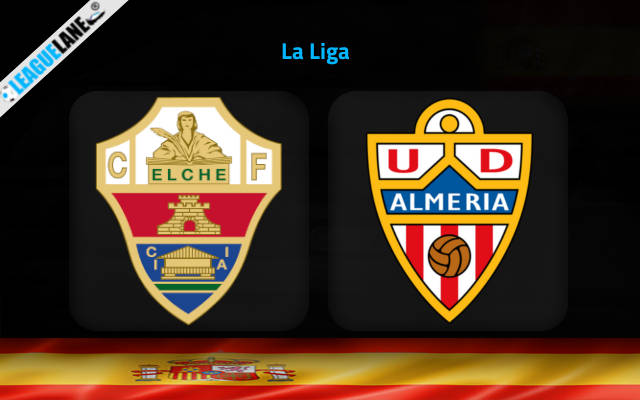 Elche and Almeria take on each other in a low-profile La Liga tie on Monday evening at Estadio Manuel Martinez Valero.

Both outfits will be searching for their inaugural point(s) in the second round having suffered respective defeats to Real Betis and Real Madrid last weekend.

Elche’s opening day fixture was ruined early on when center-back John Donald got sent off. They were generally big underdogs at Estadio Benito Villamarin even without such a handicap and it was only natural to expect them to lose confidently on the occasion.

Nevertheless, Francisco’s men have shown much better performances at home than on travels in the previous term of La Liga.

They had a positive record of 7 wins, 6 draws, and 6 defeats in 19 league matches at Estadio Manuel Martinez Valero last time out.

Elche have a great opportunity to pick up a three-pointer in the maiden fixture in front of their fans in the new campaign here.

Almeria, on the other side, got off to a flying start to their top-flight campaign when Largie Ramazani notched the early opener against champions Real Madrid just six minutes into the game.

The newly-promoted outfit had the lead against Madrid all up until the hour-mark and Lucas and substitute David Alaba turned the game around for Los Blancos midway through the second half.

Almeria had the best defensive record in the whole Segunda Division last season, conceding only 35 goals in 42 matches.

Their back line did not look to be in the best shape in the preseason checks but they should have what it takes to keep this a low-scoring tie against the likes of Elche.

Elche have managed to get the wins over bottom-half sides at home last season. They are now up against the newly-promoted outfit and we like the sky-high 2.50 odds offered for their victory here.

You can alternatively back the Under 2.5 goals FT bet at the 1.66 odds since neither of the two outfits showed decent attacking display last weekend.