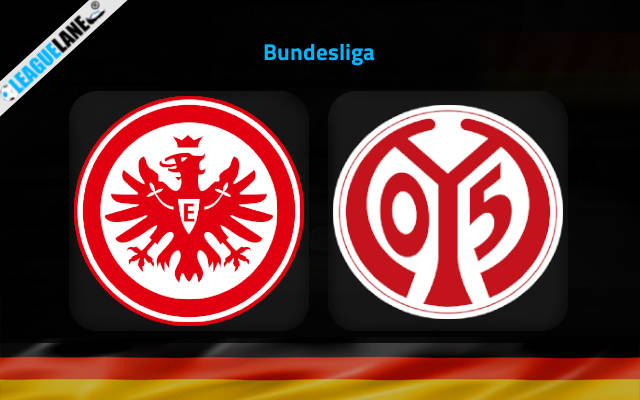 Eintracht Frankfurt spent most of the season stuck in the bottom half of the table. However, with a consistent run of wins, the club has climbed its way in the Bundesliga and will hope to keep that form going.

Mainz meanwhile could clinch a spot within the top 5 positions with a win here as we approach the halfway point of the league, as Leverkusen and/or Freiburg would drop points when they face each other this Sunday.

These teams will renew their rivalry on matchday 17 of the Bundesliga this Sunday at Deutsche Bank Park in a Hesse derby. Read our Preview, Predictions, and Betting Tips with Analysis here.

The Eagles failed to win any of their opening 6 league fixtures. However, with 5 wins in their last 6 league games, the club now occupies 7th position in the league. They are level on points with their opponents for the weekend.

The 05ers have gone through ups and downs in the first half of the Bundesliga campaign. Through 7 wins and 3 draws the side has put 24 points on the board. With 7 points from their last 5 league outings, the club is 6th in the table, 16 points behind league leaders Bayern.

The hosts have lost just once at this venue in the league since June 2020. They are favourites to emerge victors against a side that has lost 4 of their previous 5 fixtures on the road.