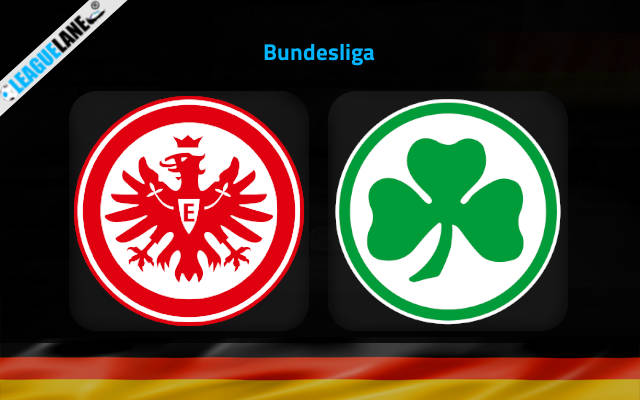 Furth are easily the absolute worst team in the whole competition, and are deservedly placed bottom-most in the table. They need a surplus of at least 11 points just to climb one spot higher, and it needs to be mentioned that they have so far posted a total of just 15 points from 27 fixtures.

And now, they have to get over the relegation cut-off, in the remaining seven games. Suffice it to say every fixture here on is a final for the team, and they will have to go for huge wins.

And this is going to be a boon for whichever team that comes opposite of them. And this Thursday, we have Frankfurt taking on this dead-last placed squad.

Eintracht are in possession of the eighth spot, and they need a surplus of six points to get to the sixth position, which would afford them an entry to the Conference League.

And they will try to make the most of this upcoming fixture. Count on Frankfurt to deliver a winning performance this Thursday at their home.

Frankfurt recorded a 0-0 draw the last match-day, against Leipzig. They are on a five-fixture unbeaten run at the moment, and they had also registered a 2-1 win at home in their latest league appearance at home.

On the other hand, Furth were held to a 0-0 draw the last match-day, by Freiburg. They are on a five-fixture winless run, and they had remained so in 12 of their past 14 overall games.

They are also on a three-fixture losing streak on the road, and they had lost 14 of their past 15 road trips.

Taking into account these observations, expect a win for Frankfurt this Thursday at home, against Greuther Furth.