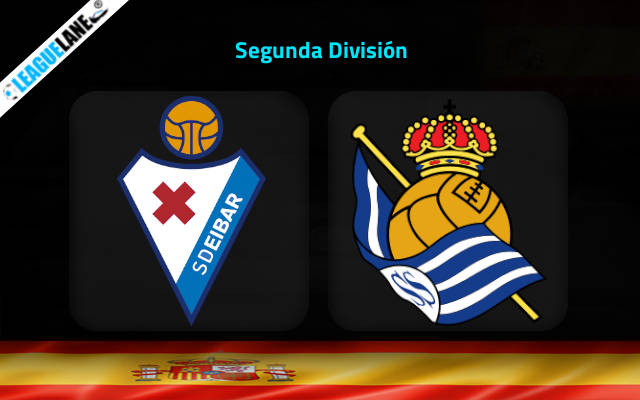 With 22 points in difference, a clash between 2nd and second last positioned teams are set to happen this Friday. Eibar is in the zone for promotion to LaLiga while Real Sociedad B is in the relegation zone after 5 straight losses in the Segunda Division. The clash is for New Year’s eve at Estadio Municipal de Ipurua for the 22nd Round in the league.

Eibar vs Real Sociedad B Head-to-head

Eibar vs Real Sociedad B Prediction

Sanse are at the second last spot at 21th on the standing with only 17 points from playing 21 games. They won only 4 times in the league while drawing on 5 and losing on 12 other occasions. They have scored 16 in total while conceding a sum of 27 which happens to be the second worst in the league.

Real Sociedad B has been scored against in 5 of their last 6 matches, letting opponents get 9 goals in all while managing to score only a pathetic number of 2. They are on a 5 game losing streak with the latest defeat was against Valladolid by 0-2.

SD Eibar is at the top, in the 2nd position on the table with 39 points. Of the 21 matches played, they won on 11 games while drawing on 6 and losing on 4 other occasions. They have the second best goals to conceding ratio on the table at 31:24.

Eibar has been scored against in 5 of their previous 6 matches, letting in 7 goals while bagging a sum of 11 for themselves. After drawing against Malaga, they won by a solid goal against Las Palmas in the previous week.

The hosts are unbeaten in their last 9 home games across all competitions while the visitors have been defeated in their last 5 matches in Segunda Division. Also the guests haven’t been successful in scoring a goal in their 4 latest games in the league as well.

We expect a home win this Friday as Eibar has lost only once out of the 10 home games played this season. With the struggling visitors across them, an easy win along with a possible clean sheet is anticipated.